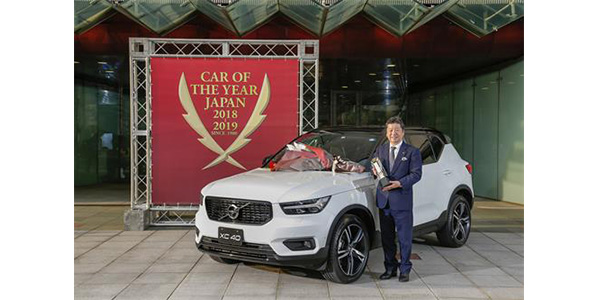 Volvo achieves first-ever back-to-back victory for an importer in Japan’s Car of the Year award – XC60 won the country’s top trophy in 2017 and the XC40 captures the Car of the Year for 2018. 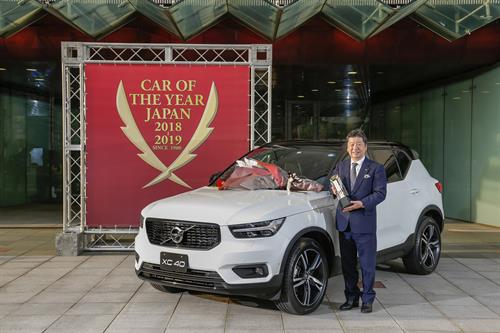 At the 2018 awards ceremony inside the Tokyo International Exchange Center, all 60 jurors, 40 of Japan’s most influential automotive publications as well as car manufacturer executives gathered to witness the vote-counting and prize-giving ceremony for this year’s Japan Car of the Year awards.

The vote counting started off as a battle between the Volvo XC40 and the Toyota Corolla Sport. After the XC40 picked up an early lead, the Corolla came back midway through counting to briefly overtake the Swedish car before the Volvo accelerated away to win by 49 votes, 363 to 314 votes respectively. The VW Polo picked up third with 197 votes, the Toyota Crown came fourth with 170 and the Mitsubishi Eclipse Cross polled fifth with 165 votes.

Accepting the trophy in front of 60 Car of the Year jurors and more than 200 industry colleagues, Volvo Japan CEO Takayuki Kimura said, “After the XC60 won last year, we are ecstatic with this back-to-back victory and I’d firstly like to thank our nationwide staff for this award. The XC40 is the perfect size and competitively priced for the Japanese market so we hope to transfer this award into solid sales.”

In the special awards categories, the Honda Clarity PHEV (plug-in hybrid) won the Best Innovation Award while the BMW X2 captured the Emotional Award and the Daihatsu Tocot took home the Small Mobility gong. Toyota may have missed out on the top award but its Gazoo Racing team did receive the COTY steering committee’s “Special Achievement Award” for its hugely popular victories at the Le Mans 24-hours and the World Rally Championships. A second “Special Achievement Award,” was given to the Honda N-Van.

To learn more about the Japan Car of the Year, go to http://www.jcoty.org/.

Advertisement
In this article:Japan Car of the Year, Volvo
Print
Up Next:

HELLA To Present Products, Services at Automechanika 2022
Connect with us