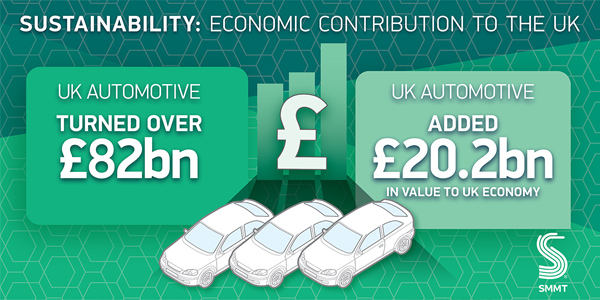 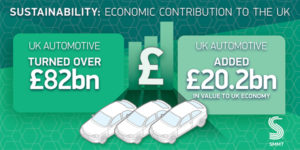 The Society of Motor Manufacturers and Traders (SMMT) in the U.K. is calling for swifter progress on Brexit and a deal that, at a minimum, maintains customs union membership and delivers single-market benefits. The call came as SMMT published the latest industry figures showing record turnover, the result of long-planned investments, but amid growing concern that such progress could be reversed in the absence of clarity on the U.K.’s future regulatory and customs relations with the European Union (EU).

In 2016, CLEPA, the European Association of Automotive Suppliers, issued a statement on the importance of the U.K.’s automotive sector to the EU’s GDP, with numbers showing its massive impact. “The European automotive sector employs more than 12 million people, produces a quarter of the world’s vehicles each year and represents more than 6 percent of the EU’s GDP,” said the CLEPA statement. “The U.K. plays an important role for our sector, with manufacturers and suppliers highly integrated across Europe. In the past five years, the production of cars in the U.K. increased by 25 percent, up to 1.6 million cars in 2015 and is expected to reach 2 million by 2020. The U.K. is therefore one of Europe’s top automotive manufacturing countries.”

In 2015, 77 percent of the U.K.’s car production was exported, with the overwhelming majority received by the EU. The U.K. also is the EU’s second-largest new car market. In 2015, the U.K. imported more than 2.2 million cars – with the vast majority coming from other EU Member States.

Jobs in the U.K. automotive manufacturing sector rose 2.8 percent to 186,000, with employment across the wider industry reaching 856,000. At the same time, the industry improved its environmental impact, with waste to landfill falling to a new low of 0.7 percent and impressive reductions in water and energy use. This positive growth is largely due to significant investment in the sector over the past decade, says SMMT.

Despite this positive performance last year, the first six months of 2018 have been less encouraging, SMMT says. Production output has fallen alongside slowing demand in the new vehicle markets. In October 2017, research firm JATO Dynamics reported that new car registrations in Europe had begun to decrease due to Brexit uncertainty.

In addition, job cuts have been announced and investment has stalled, according to SMMT’s research, with just £347.3 million (approx. $459 million USD) earmarked for new models, equipment and facilities in the U.K. – almost half the sum announced in the same period last year.

With decisions on new vehicle models in the U.K. due soon, SMMT says the U.K. government must take steps to boost investor confidence and safeguard the thousands of jobs that depend on the sector.

“Government must end the current uncertainty about the UK’s future trading relationship with the EU, and commit to continued membership of the customs union and maintenance of the benefits the single market delivers. Leaving the single market and customs union will bring an end to the seamless movement of goods that the U.K. automotive industry relies upon, with more than 1,100 trucks from the EU bringing components to car and engine plants every day,” SSMT said in a statement.

Speaking this week at the industry’s annual Summit, Mike Hawes, SMMT chief executive, said, “There is no Brexit dividend for our industry, particularly in what is an increasingly hostile and protectionist global trading environment. Our message to government is that until it can demonstrate exactly how a new model for customs and trade with the EU can replicate the benefits we currently enjoy, don’t change it.”

Advertisement
In this article:Brexit, EU, UK
Print
Up Next:

Taking To The Open Road For Gender Equality In Saudi Arabia