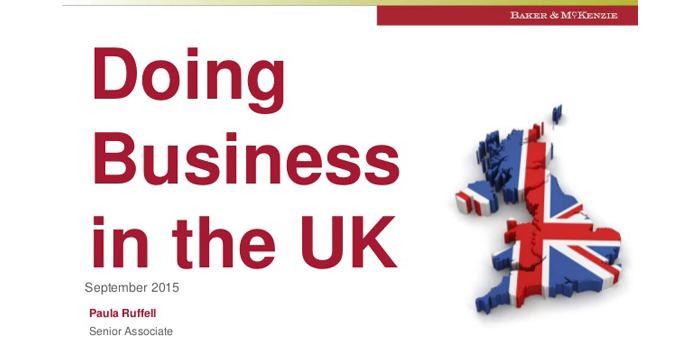 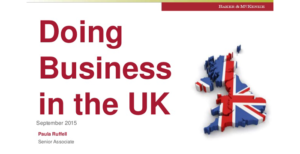 Editor’s Note: The U.K. is one of the many important groups of countries in Europe. Between it and its bordering countries, it can be difficult to keep track of the constantly evolving legislature and governmental policies. In this week’s On-Demand Seminar with GlobalBusinessProfessor.com, we explore doing business in the U.K., in regard to taxes and commercial benefits, with Paula Ruffell, senior associate of Baker & McKenzie.

Learn how your company can profit from the many favorable tax and commercial benefits in the U.K. by watching the On-Demand Seminar, “Doing Business in the UK,” presented by Paula Ruffell, senior associate, Baker & McKenzie, London.

The 15-minute seminar, produced by GlobalBusinessProfessor.com and GlobalAutoIndustry.com, presents details on corporate taxes in the U.K. Currently at 20 percent, the rate is scheduled to be reduced to 18 percent in 2020. Ruffell points out that the U.K. will have the lowest corporation tax rate in the G20 and is one of the most generous regimes in the world for deduction of finance costs from taxable profits. Furthermore, she details tax exemptions and double tax agreements. U.K. business structures are presented and compliance and anti-avoidance rules relevant to multinationals are clearly explained. Lastly, other U.K. tax facts and current issues are explored, such as IP tax incentives, transfer taxes, VAT, rulings, compliance and disputes, changes to U.K. tax law and the uncertainty caused by a possible U.K. exit from the European Union.

Ruffell advises on controversy arising from U.K. and international tax issues. Previously a solicitor at the U.K.’s inland revenue department for more than 8 years, she conducted civil litigation before the U.K. and EU courts arising from business tax, capital taxes, stamp duty and corporation tax. The Baker & McKenzie London Tax Department advises on the U.K. tax aspects of international projects and coordination of tax advice from many countries in multijurisdictional projects, such as international group structuring and mergers and acquisitions.

From GlobalBusinessProfessor.com: Tax And Commercial Benefits Of Doing Business In The UK