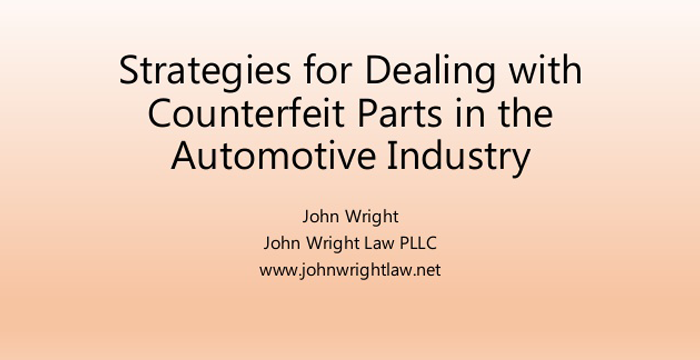 Recently, we’ve seen active efforts on the part of the industry to reduce outlets for these parts. Notably, sites such as alibaba.com have been called out for the parts they sell, and events such as CES and AAPEX have strict intellectual property rules for their exhibitors. 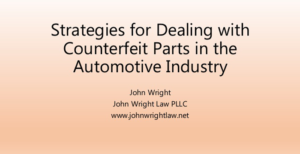 Editor’s Note: Both internationally and domestically, counterfeit parts is something our industry is constantly battling. Recently, we’ve seen active efforts on the part of the industry to reduce outlets for these parts. Notably, sites such as alibaba.com have been called out for the parts they sell, and events such as CES and AAPEX have strict intellectual property rules for their exhibitors. Watch the On Demand Seminar for additional ways to protect your company and threats that counterfeit parts have.

Counterfeit parts cost the automotive industry billions of dollars annually. In the On Demand Seminar, “Strategies for Dealing with Counterfeit Parts in the Automotive Industry,” attorney John Wright describes specific measures that small- and medium-sized businesses can take to prevent the potentially devastating effects of counterfeiting.

In the seminar, produced by GlobalBusinessProfessor.com and GlobalAutoIndustry.com, Wright highlights the threats that counterfeit products pose, including safety concerns, damage to the company brand and lost revenue. He focuses the seminar on describing specific steps that can be taken to prevent counterfeiting and strengthen the supply chain.

A simple, cost-effective and greatly underutilized first step that Wright describes is the process of registering and recording copyrights and trademarks with Customs and Border Protection (CBP). This allows CBP to alert the intellectual property owners if they suspect copyright or trademark infringement. Wright describes a new rule, effective October 2015, that greatly benefits companies by permitting CBP to share more information about counterfeit products with intellectual property owners.

In addition, Wright presents an overview of the National Intellectual Property Rights (IPR) Coordination Center, and he explains that this is a clearinghouse for investigations into counterfeit goods. Wright further describes additional measures that can be taken using technology, and he identifies allies in the fight against counterfeit goods including repair shops and trade associations.

Wright is an attorney specializing in trademark, copyright and business law. He is licensed to practice in Michigan and admitted to practice in front of both federal courts in the state, as well as the Sixth Circuit Court of Appeals. He has experience working as an attorney in the government setting and at a law firm. Wright also has extensive legal training that began when he earned his law degree from Wayne State University Law School in Detroit.

IHS Global Outlook For Automotive Sales: A Good Year For Mature Markets, Not So Good For Emerging Markets

From GlobalBusinessProfessor.com: Strategies For Dealing With Counterfeit Parts