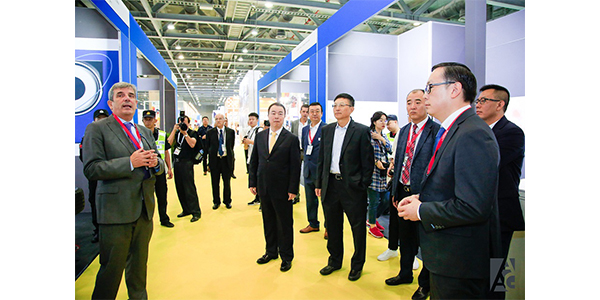 Autopromotec organizers returned together with 30 Italian companies in the sector from their first mission to the Auto Aftermarket Guangzhou exhibition – held in China on 11-13 October 2019 – having collected contacts for future commercial agreements and contracts for the sale and supply of workshop equipment and products.

A group of 30 Italian automotive after-sales companies that took part in the Car Aftermarket show Oct. 11-13 in Guangzhou, China, are reporting positive results. The project was promoted by the organizers of Autopromotec in partnership with BolognaFiere.

Autopromotec organizers returned together with 30 Italian companies in the sector from their first mission to the Auto Aftermarket Guangzhou exhibition – held in China on 11-13 October 2019 – having collected contacts for future commercial agreements and contracts for the sale and supply of workshop equipment and products.

During the three days of the event, the companies operating in the fields of spare parts, workshop equipment, technologies for predictive diagnosis and motorsports met with buyers, manufacturers and trade associations that are active both in China and in several countries of Southeast Asia. The aim of the mission was to promote the strength of Italian industry and open new trade routes to a Chinese market with 26 million vehicle registrations per year.

“Autopromotec is more than just a trade show, accompanying its exhibitors on their search for new opportunities and making available all the knowledge of the various countries acquired through many institutional contacts and associations,” said Renzo Servadei, Autopromotec CEO. “We would therefore like to be able to define ourselves as an X.0 trade fair event.”

The “Autopromotec mission in China” project, promoted by the organizers of the biennial international automotive after-sales event in partnership with BolognaFiere China and its Chinese partner Sinomachint, was also sponsored by ITA – Italian Trade Agency, formerly known as ICE, an agency for the promotion of Italian companies abroad and their internationalization. The latter acted as a facilitator for a series of bilateral meetings between Italian exhibitors and a select group of buyers from the Guangdong region.

The Italian delegation also took part in a number of guided tours in production plants normally closed to the public, like GAC NE, which produces electric motor vehicles. The participants in the Italian mission included five representatives of car dealers from Northern Italy, who had the chance to meet their Chinese counterparts for an exchange of business experiences. Autopromotec therefore continues to support the Made in Italy automotive supply chain as it approaches foreign markets through projects that represent the natural evolution of Autopromotec’s development strategy, which for several years has been strongly focused on international growth.

To stay up to date on Autopromotec and all related initiatives, visit http://www.autopromotec.com.

Advertisement
In this article:Autopromotec, Italy
Print
Up Next: