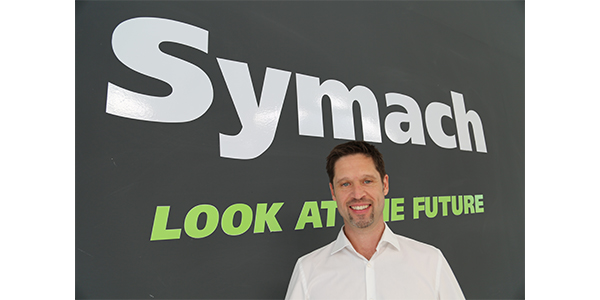 Prior to joining Symach, Healer worked at Nitrotherm Spray as national sales manager, U.K. In that role, Healer was involved in the coatings industry and built relationships with those in automotive manufacturing, Tier 1 suppliers and the refinish sector.

Symach has appointed Stephen Healer as Symach’s U.K. sales manager, effective immediately. Healer’s appointment is part of a larger plan to open a Symach U.K. subsidiary within next year. The new UK office will reinforce commercial structure in the U.K. to offer on-site support to its customers and provide timely responses to their needs.

Prior to joining Symach, Healer worked at Nitrotherm Spray as national sales manager, U.K. In that role, Healer was involved in the coatings industry and built relationships with those in automotive manufacturing, Tier 1 suppliers and the refinish sector.

“With Stephen’s extensive experience in the coatings industry, he will be instrumental in helping Symach showcase its complete body shop solution,” said Osvaldo Bergaglio, Symach’s CEO. “He will work closely with body shops across the U.K. to demonstrate how they can shift from using the conventional repair process to Symach’s unique FixLine process, which drastically reduces the cost of repairs.”

More than 25 years ago, Healer joined the industry in a “temporary role” as a van sales representative for a regional coatings distributor.

“I quickly developed a passion for the refinish industry and greatly value the relationships I have formed over the years,” said Healer. “I’m excited to join Symach’s international team and help collision repair facilities across the U.K. learn more about Symach’s unique approach repairing vehicles based on the FixLine process.”

In the constantly evolving U.K. market, Healer said it’s important for shops to invest in innovative technologies, which will help their businesses achieve new growth targets.

“Over the past decade, the accident repair industry in the U.K. has declined by around 20 percent to just over 3,000 body shops, leading to a shortage in repair capacity,” said Healer. “We also see a shortage in skilled staff, specifically painters, contributing to increased staffing costs.”

Healer said this will lead to an increase in overall repair costs.

“As repair volumes decrease and costs increase, this is applying pressure on body shops to reduce their costs and increase productivity,” said Healer.

Healer said the Symach process was developed for shops with the vision and drive to achieve continual growth in a changing market. He foresees dealership body shops; independent repair groups and insurer shops continue to expand.

“I look forward to building new relationships with these groups and demonstrating how Symach equipment and technology is perfectly aligned to help them be successful now and, in the future,” Healer concluded.

Advertisement
In this article:executive appointments, Symach, UK
Print
Up Next: