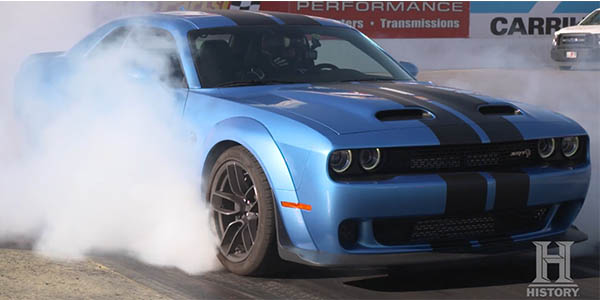 Bondurant High Performance Driving School will be featured on HISTORY’s “It’s How You Get There,” on Sunday, Aug. 2.

Bondurant High Performance Driving School, the official high performance driving school of Dodge//SRT, will be featured on Season 3 of HISTORY’s It’s How You Get There, on Sunday, Aug. 2, at 8 a.m. EST. The episode follows the show’s hosts Jenn Barlow, Sam Nehme and Julian Taylor as they put the performance capabilities of the Dodge//SRT line to the test on the largest purpose-built driver training course of its kind in North America.

“We’re excited to share the experience of the school with It’s How You Get There fans,” said Mike McGovern, chief instructor at the Bondurant school. “The crew really captured the thrill that only comes from getting behind the wheel of a powerful Dodge//SRT vehicle. The hosts’ passion for performance is contagious. They’ll inspire every enthusiast to test their own driving and racing skills behind some of the world’s fastest production cars.”

HISTORY’s It’s How You Get There follows three daring hosts as they cross the country in search of the adrenaline rush that comes from performance machines built for land, sea and air. Their larger-than-life personalities entertain viewers with witty banter, competition and wagers, and provide information about high performance vehicles. Season 3 of It’s How You Get There will be available on Amazon Prime following the season’s initial airing on HISTORY.

“We found the world’s best driving school at Bondurant,” said Julian Taylor. “We had an entire week to play and learn on the country’s most famous road course behind the wheel of the 700-plus horsepower Dodge//SRT Challenger Hellcat. Then we climbed into Dodge’s 840 horsepower Challenger SRT Demon to enjoy some serious excitement on the drag strip. There’s no way you won’t be inspired to go to Bondurant and drive these Dodge cars after watching this episode.”

The episode of It’s How You Get There featuring the powerful Dodge//SRT performance vehicle line up and Bondurant High Performance Driving School was filmed in October 2019. Since then, Bondurant has invested $1 million to renovate its 1.6 mile 15-turn track, NHRA drag strip, classrooms and event space to further enhance the guest experience.

Advertisement
In this article:Bondurant High Performance Driving School
Print
Up Next: