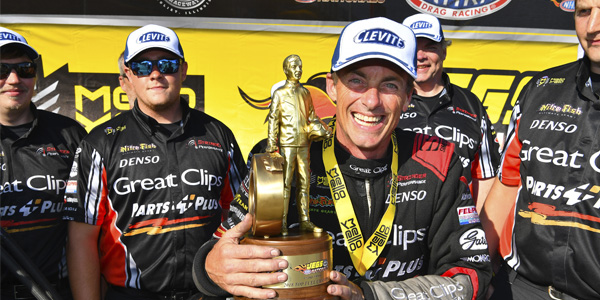 In a championship rematch from his first national event title last year, the Parts Plus driver once again outran Leah Pritchett to earn his second consecutive Wally. 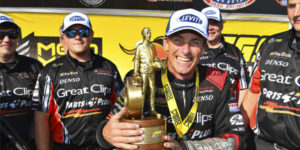 Fresh off his victory at the NHRA Heartland Nationals in Topeka, Kansas, Parts Plus driver Clay Millican earned back-to-back Wally trophies on Sunday, winning the Route 66 Nationals in Chicago, the third NHRA national event title of his Top Fuel career and his second in the 2018 NHRA Mello Yello Series.

Millican put himself in position to win during Friday’s opening qualifying session, as the Parts Plus/Great Clips dragster stormed out of the gates, clocking a 3.753 @ 326.48 mph to temporarily take command of the No. 1 qualifier spot. The Parts Plus driver finished in the No. 4 spot when qualifying concluded on Saturday, and went on to eliminate Pat Dakin, Scott Palmer and Doug Kalitta on Sunday to advance to the finals.

“I can’t thank the entire Parts Plus family enough for the support, and I want to give a big shout-out to the manufacturer partners who provide the parts that power the quickest dragster on the planet – we did this together,” said Millican. “It’s very special to return to the same track where I ran my first Top Fuel event in 1998 and win 20 years later.”

Advertisement
In this article:Clay Millican, Parts Plus
Print
Up Next: