Kinedyne LLC, designer, manufacturer and distributor of cargo control technologies, including cargo securement, capacity and access solutions for the transportation industry, has announced the release of its expansive new 50th anniversary-themed 2018 catalog and video, both available on Kinedyne’s website. 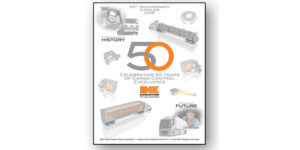 Kinedyne LLC, designer, manufacturer and distributor of cargo control technologies, including cargo securement, capacity and access solutions for the transportation industry, has announced the release of its expansive new 50th anniversary-themed 2018 catalog and video, both available on Kinedyne’s website. The catalog features 83 new products, several new product categories and more than 800 total SKUs.

The catalog and video both recount Kinedyne’s historical progress over its 50-year history and highlight the company’s product innovation over its five decades of serving the cargo control needs of commercial and military customers. The company also used the occasion of its 50th anniversary as a catalyst to formulate new mission, vision and values statements, to set the tone for its future focus.

Since its last product catalog was released, Kinedyne has expanded its leadership role under the tagline, “The Cargo Control People!” transcending its traditional role as a preeminent supplier of cargo securement and cargo capacity products, to include innovative cargo access solutions as well. With the introduction of its revolutionary new Kin-Slider and Kin-Sider curtain-side cargo access system, load-rated curtain-side access system and new aerial access sliding roof system, Kinedyne says it is uniquely positioned to take advantage of market segment growth, particularly in the area of e-commerce and last-mile delivery.

“Over the past 50 years, Kinedyne has set the pace with innovative products that have helped the industries we serve become safer while making it possible to achieve higher levels of overall supply chain productivity,” Dan Schlotterbeck, president of Kinedyne LLC, said. “The new products and themes represented in our 50th-anniversary catalog capture our sense of excitement as we transition from celebrating our remarkable history to creating a dynamic new future of cargo management technology.”

The K-FORCE brand of winch, ratchet and logistics straps is a completely new offering from Kinedyne. Like the RHINO MAX straps, the new K-FORCE straps are engineered to manage heavier loads with more polyester material in the body of the strap than Kinedyne’s standard webbing.

Other newcomers to the catalog include:

“We’ve grown and refined our offerings in virtually all of our conventional product categories, including flatbed, interior van, webbing, hardware and tire chains,” Schlotterbeck said. “Kinedyne’s recent expansion into curtain-side cargo access technology is complementary to our reputation as ‘The Cargo Control People!’ and ushers in a new era of service to our industry.”

VIPAR Heavy Duty Gives Back To Its Community