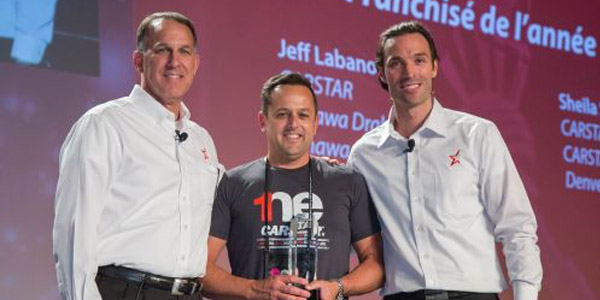 For the first time at its annual conference, CARSTAR North America recognized both United States and Canadian CARSTAR owners and business groups throughout its network for their leadership and performance.

For the first time at its annual conference, CARSTAR North America recognized both United States and Canadian CARSTAR owners and business groups throughout its network for their leadership and performance.

Franchisee of the Year 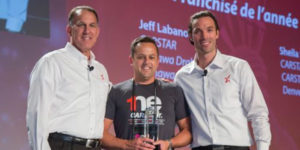 Franchisee of the Year is the highest award given in the CARSTAR system, and it represents the best of the best. These two winners were chosen on criteria such as using all vendors possible, attending the annual conference, commitment to the EDGE program, being image compliant, submitting reports on time online and delivering consistently high CSI for the month and quarterly periods.

For Canada, the 2017 Franchisee of the Year is Jeff Labanovich, owner of CARSTAR Oshawa Drake Street. He is a longtime franchisee with two locations, and is chair of the CARSTAR Canada advisory board. He has delivered double-digit growth over the past several years, is very engaged in the community and has an excellent brand presence in the marketplace.

In the U.S., the 2017 Franchisee of the Year is Sheila Samuels and her brother Jeff Samuels of CARSTAR Ideal and CARSTAR Arvada. They are a leader in the market on systems and processes and an integral part of the Denver business group. According to CARSTAR, they have one of the most beautiful facilities in the company’s system, they have embraced a scheduling program, they have engaged in the advanced EDGE process and they are getting ready for eco-lean. They have created a great shop culture with long-term employees, and are always a leader in the market on charitable donations.

Rookie of the Year

The Rookie of the Year award is given in recognition to a new CARSTAR franchisee as it gets “up and running” with CARSTAR. To qualify for the award, a franchisee must be in their first year with CARSTAR, have completed CARSTAR immersion and enthusiastically embrace the CARSTAR culture with active participation.

For Canada, the 2017 Rookie of the Year is Ron Alberts of CARSTAR St. Stephen, New Brunswick. The company says he has proven to be a very progressive thinker. He is a best-in-class location, is a true ambassador of the CARSTAR Brand and is very integrated in the community.

In the U.S., the 2017 Rookie of the Year is Kevin Raines, with CARSTAR Centre City and CARSTAR West Chester. Raines opened two stores in the Cincinnati area late last year, becoming the company’s 500th location, and is on track to open two more this year.

The Next Generation Award honors a second or third generation CARSTAR owner who is excelling at leading a family business, continues to meet high-performance standards, participates in key CARSTAR programs like the EDGE Performance platform, attends conference and is image-compliant.

The 2017 Next Generation Award for Canada is presented to Joe and Paul Saputo, owners of CARSTAR Ancaster. These recipients were one of the first CARSTAR Franchise locations in Canada. They have been very successful in transitioning the business from their father and mother and have grown sales by 25 percent since they have taken over the business. They have just recently opened their second location in Ancaster, Ontario.

For the U.S., the 2017 Next Generation Award is presented to Jamie White, owner of CARSTAR Ken’s North and CARSTAR Dalton South. White purchased both locations from his Uncle Ken White in January 2017 and is now staged for additional growth.

“It is an incredible honor to be able to recognize the achievements of these great shops, owners and executives,” said Macaluso. “Our North American award recipients not only set a great example for other shops to follow, they also spread their knowledge experience throughout the entire CARSTAR network to help each and every one of our shops grow.”

Advertisement
In this article:awards, carstar, Top Shops
Print
Up Next:

Roll By Goodyear To Donate 100 Meals For Every Tire Sold