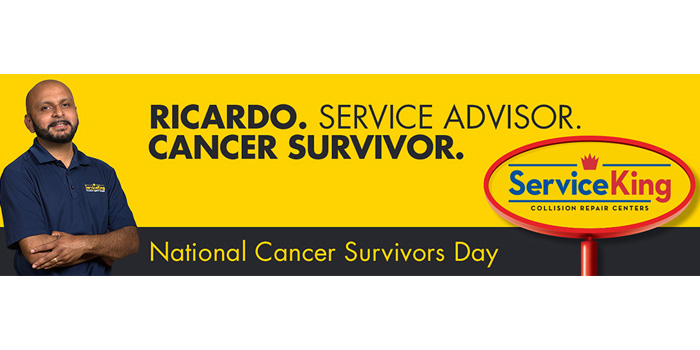 The organization is currently featuring a number of its own cancer survivors on 48 high-profile digital billboards in 11 major markets across the U.S. 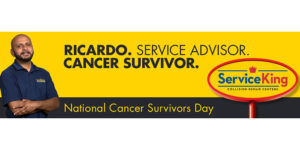 Service King Collision Repair Centers set out to pay tribute to National Cancer Survivors Day on June 4 as part of the organization’s ongoing effort to spread hope to those bravely battling all types of cancer.

The organization is currently featuring a number of its own cancer survivors on 48 high-profile digital billboards in 11 major markets across the U.S. Each design includes a photo of a Service King cancer survivor accompanied by the word ‘Survivor.’ The placements also feature the teammate’s position at Service King and a reference to National Cancer Survivors Day.

The design aims to raise awareness of National Cancer Survivors Day — now in its 30th year of celebrating survivors and inspiring those recently diagnosed with cancer — while also humanizing the words ‘Cancer Survivor’ by placing it alongside the face of a real Service King cancer survivor. Meanwhile, Service King — which also annually partners with the National Breast Cancer Foundation — continues to mobilize its resources to providing a voice to all cancer fighters and survivors nationwide.

“The inspiration for this campaign comes directly from The Service King Way which calls our teammates to join hands with those in our local communities,” said Danny Briones, Service King senior director of marketing and advertising. “Service King has a long heritage of supporting cancer survivors and those currently in the fight through our partnership with the National Breast Cancer Foundation. We’re proud to now lend our national reach to honoring National Cancer Survivors Day. Our desire is to provide inspiration and hope to those bravely battling cancers of all types across the country.”

In addition, Service King is providing a collective voice to its teammates and cancer survivors online through a dedicated blog post. The post, featured here, includes voices from teammates across the company in their own words about what the word ‘Survivor’ means to them.

This weekend’s campaign is not the first time Service King has dedicated its vast billboard inventory to spreading a message of hope and support. In October, the organization leveraged its resources to promoting the National Breast Cancer Foundation’s mission of Helping Women Now. That campaign featured the messaging ‘Don’t Miss the Signs of Breast Cancer’ to raise awareness of the benefits of early detection in the battle against breast cancer.

Since 2014, Service King and its teammates across the country have raised more than $350,000 for the National Breast Cancer Foundation and its various support programs and research efforts.

For more information on Service King, or to learn more about the organization’s various partnerships with non-profit organizations, visit ServiceKing.com.

Advertisement
In this article:ad campaign, Cancer, service king
Print
Up Next: