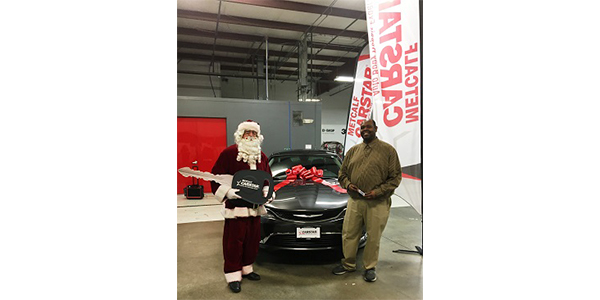 A veteran from Kansas City, Missouri, received an early Christmas gift when Santa awarded him keys to a 2015 Chrysler 200 at a ceremony on Thursday, Dec. 12.

Lawrence Smith (shown at right receiving keys to a 2015 Chrysler 200 from Santa Claus at CARSTAR Metcalf), was chosen by Veterans Community Project (VCP) in Kansas City. Smith lives in “VCP Village,” which is a community of tiny homes built by the VCP as transitional living for homeless veterans.

Smith does not currently have access to a vehicle. To get to his job, he has taken the bus to work for the past seven months, which is approximately 90 minutes to work and 90 minutes back. Smith, an Army veteran, needed his own transportation, not only to reduce his commute, but also to allow him to begin school. He plans to start classes in January 2020, which will allow him to pursue his dream of a career in Information Technology.

“This car couldn’t go to a more deserving or harder-working guy. Watching his growth while at VCP over the past year has been inspiring. He set a goal, he has worked very hard toward it, and now he will have the ability to go back to school, thanks to this car,” said Wes Williams, case manager at Veterans Community Project.

The Chrysler 200 was donated by Farmers Insurance. The vehicle had been damaged due to a collision but had less than 63,000 miles. Technicians at CARSTAR Metcalf volunteered their skills to repair and refurbish the car.

“When Farmers offered this car, I thought it was perfect for the NABC Recycled Rides program,” said Steve Hahn, owner of CARSTAR Metcalf. “This is a great way to give back to veterans in our community and show them appreciation.”

“Farmers Insurance was founded by two World War I veterans and we are proud of our longstanding commitment to our nation’s veterans and military members,” said Wendy Hesse, an MSO account manager for Farmers Insurance. “The Farmers team is honored to be able to give the gift of dependable transportation to a veteran who has sacrificed for our country.”

Farmers employees from the Olathe, Kansas, office also donated some “extras” to the veteran during the holiday season, including a winter coat, winter accessories and gas station gift cards.

This is the second year CARSTAR Metcalf has partnered with Veterans Community Project to donate a car to a veteran to help them improve their lives.

Advertisement
In this article:carstar, NABC, Recycled Rides
Print
Up Next:

WIN Calls For Board Candidates

I-CAR Opens Nominations For Industry Awards
Connect with us