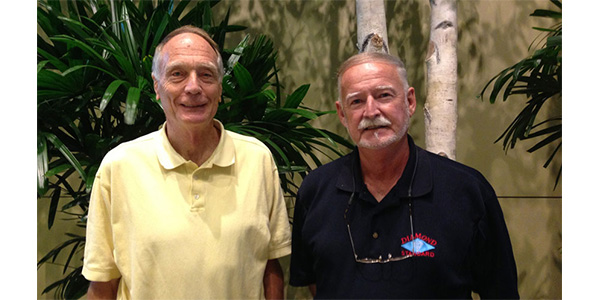 Neat (pictured left) passed away Feb. 26, 2019. He began his life in the Pacific Northwest, into a hardworking family that was proud of its Swedish heritage.

“It is with much sadness I inform the industry of the passing of George Neat, in Hingham, Massachusetts, on Feb. 26,” said Michael O’Neal, Diamond Standard president. “George, Volpe Center Executive, was an integral part of development our exemplary component test protocols and together with the late James Hackney, director of crashworthiness, NHTSA, provided us with the knowledge, expertise and tools to change the dynamic of aftermarket parts manufactured by Diamond Standard. He was a world-class scholar and gentleman of the highest order, a friend and a mentor.”

Neat passed away Feb. 26, 2019. He began his life in the Pacific Northwest, into a hardworking family that was proud of its Swedish heritage. At the young age of 16, he lost his pioneering dad, who instilled in George the basis of his core values: honesty and integrity. His organic-before-it-was-a-trend mom provided an optimistic example on how to enjoy life and the love of God. Neat’s proudest legacy was his family. He and first wife, Marilynn, were fortunate to celebrate 50 plus years of marriage, two sons and five happy grandkids. His strong faith and eternal optimism helped him overcome the loss of Marilynn in 2010. Neat called himself “the luckiest man alive” when he found his second wife, Kathy, who also was his dental hygienist. Together, they enjoyed each other’s company and matching family sets (two sons, five grandkids). Neat loved to ski, hike and fish in his beloved Pacific Northwest and in the backwoods of Maine. He also was passionate about the ocean. For most of his life, he owned a small waterfront lot on Treasure Island in Puget Sound. On his 80th birthday, he enjoyed a family swim with his sons and his grandkids at Humarock Beach in Marshfield. He appreciated a fine meal and classical music.

Whether it was a family style Dungeness crab Louie or a fresh Maine lobster from Millers, he loved to eat. He cherished many BSO concerts; both at Symphony Hall and Tanglewood. And of course, the music and the food was always better with a good bottle of red wine. At what turned out to be his final meal in the hospital, he toasted to a great life with a glass of his favorite Rombauer red zinfandel. Neat’s innate mechanical engineering mind fueled Boeing, NASA and Volpe Center projects. He took the courageous step of moving his young family from Seattle to the Boston area in order to pursue further education at MIT in 1966. His previous Navy duty, served at the U.S. Naval Ammunition Depot (now Wompatuck State Park), paved the way for this subsequent move to the East Coast. He would reside in the east for the rest of his life.

His proudest employment accomplishment was the Bonanza V-Tail Report, which resolved the mystery of the plane’s mechanical failures. His brain also was the creative spark behind home projects that included backyard ice rinks, luxurious brick patios and custom furniture. A common thread from his church friends, Chanticleers breakfast buddies, work relationships and family, was his abundant kindness. He believed in and lived a compassion-filled life. He would easily give up his cherished sleep for the opportunity to cook his famous Swedish pancake breakfast for his grandkids before they would head out on the slopes.