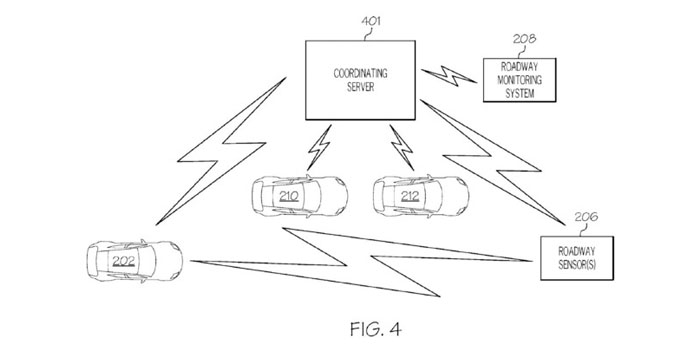 IBM has announced that its scientists have been granted a patent around a machine learning system that can dynamically shift control of an autonomous vehicle between a human driver and a vehicle control processor in the event of a potential emergency.

IBM researchers developed the patented system using their understanding of biological cognition and behavior generation in the brain. Their background as computational neuroscientists led the inventors to devise a cognitive model and technique that employs sensors and artificial intelligence to dynamically determine potential safety concerns and control whether self-driving vehicles are operated autonomously or by relinquishing control to a human driver.

IBM today announced that its scientists have patented a cognitive system to manage the safety of self-driving vehicles. The graphic shown here illustrates a self-driving vehicle, roadway sensors, and a roadway monitoring system communicating with a coordinating server to dynamically determine potential concerns and control whether self-driving vehicles are operated autonomously or relinquish control to a human driver. 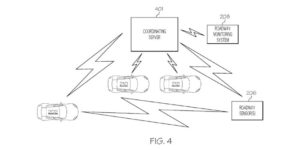 For example, if a self-driving vehicle experiences an operational anomaly, e.g. a faulty braking system, a burned out headlight, poor visibility and/or road conditions, a comparison may be made by the system as to whether the on-board self-driving vehicle control processor or a human driver is in a better position to handle the operational anomaly. If the comparison determines that the vehicle control processor is better able to handle the anomaly, the vehicle is placed in autonomous mode.

IBM was granted U.S. Patent No. 9,566,986: Controlling driving modes of self-driving vehicles for this invention.

“Self-driving vehicles hold great promise and potential, but protecting the safety of passengers and other drivers remains a top priority for vehicle developers and manufacturers,” said James Kozloski, manager, Computational Neuroscience and Multiscale Brain Modeling, IBM Research and co-inventor on the patent. “We are focused on finding new ways to leverage our understanding of the human brain and inventing systems that can help those enterprises improve the safety of autonomous vehicles on the road.”

While IBM’s newly patented machine learning invention addresses the complexity of dynamically enabling safe operation modes of an autonomous vehicle, other patented IBM inventions are focused on helping self-driving vehicles better anticipate and respond to actions of human drivers. For example U.S. Patent No. 9,361,409: Automatic driver modeling for integration of human-controlled vehicles into an autonomous vehicle network describes a machine learning system that models human driving techniques. The invention also employs a common interface that enables self-driving vehicles to communicate with one another, learn and better understand how to interact with human drivers as the models become more informed.

According to the IBM Institute for Business Value , automobiles are evolving from a mode of transport to a moving data center outfitted with sensors and computers that capture information about the vehicle, its driver, occupants and surroundings. At the same time, conversational interfaces are enabling drivers to interact with their vehicles more naturally and, with machine learning, automobiles can learn about their drivers and personalize the driving experience accordingly, says IBM.

IBM inventors have patented numerous inventions that, among other things, can help vehicles become:

1) Self-learning – powered by cognitive capability that continuously learns and gives advice based on behavior of the driver, passengers and other vehicles

5) Self-integrating – integrating into the Internet of Things, connecting traffic, weather and mobility events with changing location

IBM has topped the list of U.S. patent recipients for 24 consecutive years.

Advertisement
In this article:IBM, Self-Driving Cars
Print
Up Next: