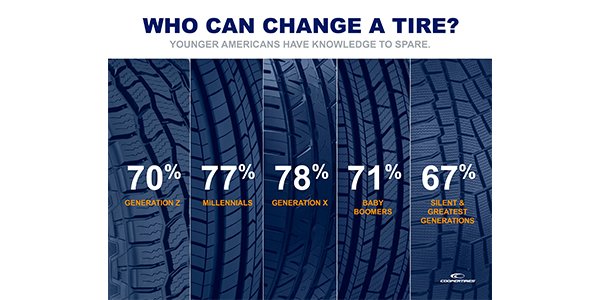 Cooper Tires survey shows 81 percent of Americans have had a flat tire and 74 percent say they know how to change a flat tire. 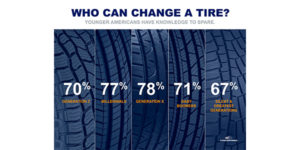 A recent survey conducted by Cooper Tires found that the majority of Americans say they can change a tire. With younger generations, especially millennials, buying fewer cars than older generations, the prevalence of basic car skills and the ability to handle road mishaps, such as a flat tire, might appear to be waning. However, Cooper found that almost three-fourths of Americans say they are confident they know how to change a tire.

“Our survey found that 81 percent of respondents have experienced a flat tire so, unfortunately, this is something that most drivers will face,” said Jessica Egerton, director, brand development, Cooper Tire & Rubber Co. “We want all drivers to be prepared for and armed with tire-change know-how and Cooper offers step-by-step instructions on installing a spare tire on your car to get you back on your way until you can reach a mechanic.”

In addition to better understanding Americans’ abilities when it comes to changing a tire, the survey also uncovered interesting links between habits, preferences and tire change know-how.

There’s no generation gap (or so people say)

How Many Americans Know How To Change A Tire?