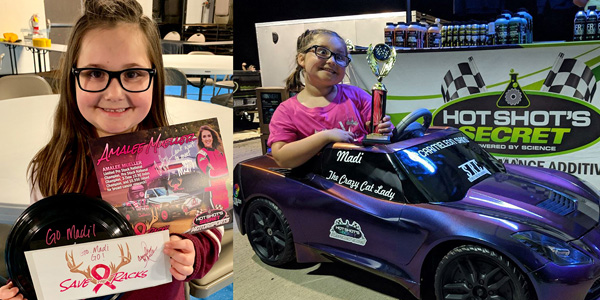 Hot Shot’s Secret, a two-year sponsor of Pacemakers Dragway Park in Mount Vernon, Ohio, is continuing its sponsorship of Madi Lowther as she moves up to racing in the Jr. Dragster class this year.

The season opens April 13 and runs through the end of October.

Her Dad, Justin Lowther, met Fischer in February 2018 at the annual Pacemakers Dragway banquet at Hot Shot’s Secret headquarters in Mt. Gilead, Ohio. The two made an immediate connection, and Hot Shot’s Secret agreed to sponsor Madi’s racing efforts for the 2018 season, as well as provide goody bags and T-shirts for the Power Wheels competitors.

“Seeing this little firecracker out on the track gives me renewed belief that our sport will continue to thrive,” Fischer added. “She’s a fierce little competitor, and I love the story about how she got her ‘Crazy Cat Lady’ title. During one particular race she was dressed for Halloween as a cat lady, and during the race her costume came loose and was dragging behind her, but she never swerved or slowed down.”

Justin Lowther added: “Madi literally grew up at the track and started racing in the Power Wheels Drag Racing series last year at age 5. My wife and I believe it is such a great place for kids to grow up where they can learn strong values and learn responsibility. I have been a volunteer firefighter for the past 10 years and we want her to be instilled with a volunteer spirit and sense of family like so many people at the track have. She has already shown so much growth, but more than that she loves racing and will be in a Jr. Dragster this season. Getting to know Kyle and the Hot Shot’s Secret team, we know they have that same volunteer spirit and are hugely supportive. And their products really do work. They helped my racing success last season in my ‘77 Chevy Monza.”

Advertisement
In this article:Jr. Dragster, Power Wheels Drag Racing, Racing
Print
Up Next: