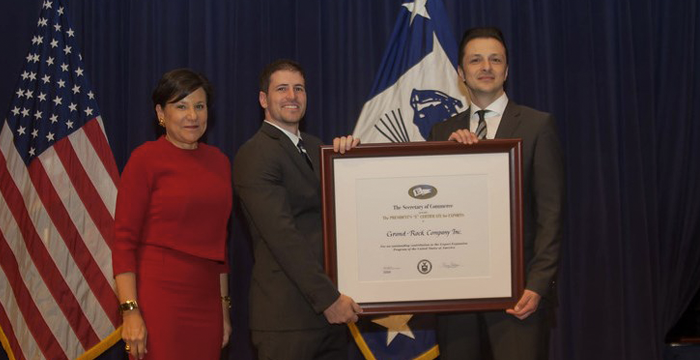 Grand Rock joins a prestigious group of American success stories to be awarded this honor, such as the Harley-Davidson Motor Co., Vita-Mix and FedEx Corp., to name just a few.

Grand Rock Exhaust Co. of Painesville, Ohio, was recently presented with the esteemed President’s “E” Award for excellence in exports. The award recognizes the company’s achievements in supporting export growth in the North American business community. During the annual award ceremony in Washington, D.C., Secretary of Commerce Penny Pritzker presented the award to Ryan Arth, Grand Rock’s president and CEO, and Haris Tokalic, executive vice president of Grand Rock, on May 16. 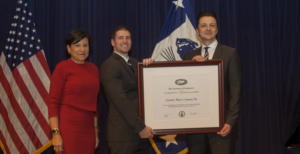      The “E” and “E Star” Awards are the highest recognition any U.S. entity may receive for supporting export activity. Winners are authorized to fly the blue and white banner, to display the accompanying certificate commendation which is signed by the Secretary of Commerce in the name of, and by the authority of the President of the United States, to wear the “E” lapel pin, and to refer to the award in their advertising.

Arth said, “We are honored to receive this very prestigious award. It recognizes not only our achievement in attaining increased export business and preserving manufacturing jobs here in the U.S., but also the excellent efforts of our employees in meeting the growing demand for our products around the world.”

Tokalic added, “Grand Rock has been a long-term client of the Commercial Service’s Cleveland U.S. Export Assistance Center, and we have greatly benefited from export counseling, market research and trade events, that have allowed us to grow and expand our new export sales around the world.”

“Congratulations to companies in Ohio for their achievements in exporting,” said Secretary Pritzker. “These Ohio companies demonstrate the opportunity inherent in selling Made-in-America products to the broad customer base that exists outside our borders. Their success contributes to growth, job creation, competitiveness and the success of the American economy.”

Grand Rock joins a prestigious group of American success stories to be awarded this honor, such as the Harley-Davidson Motor Co., Vita-Mix and FedEx Corp., to name just a few.