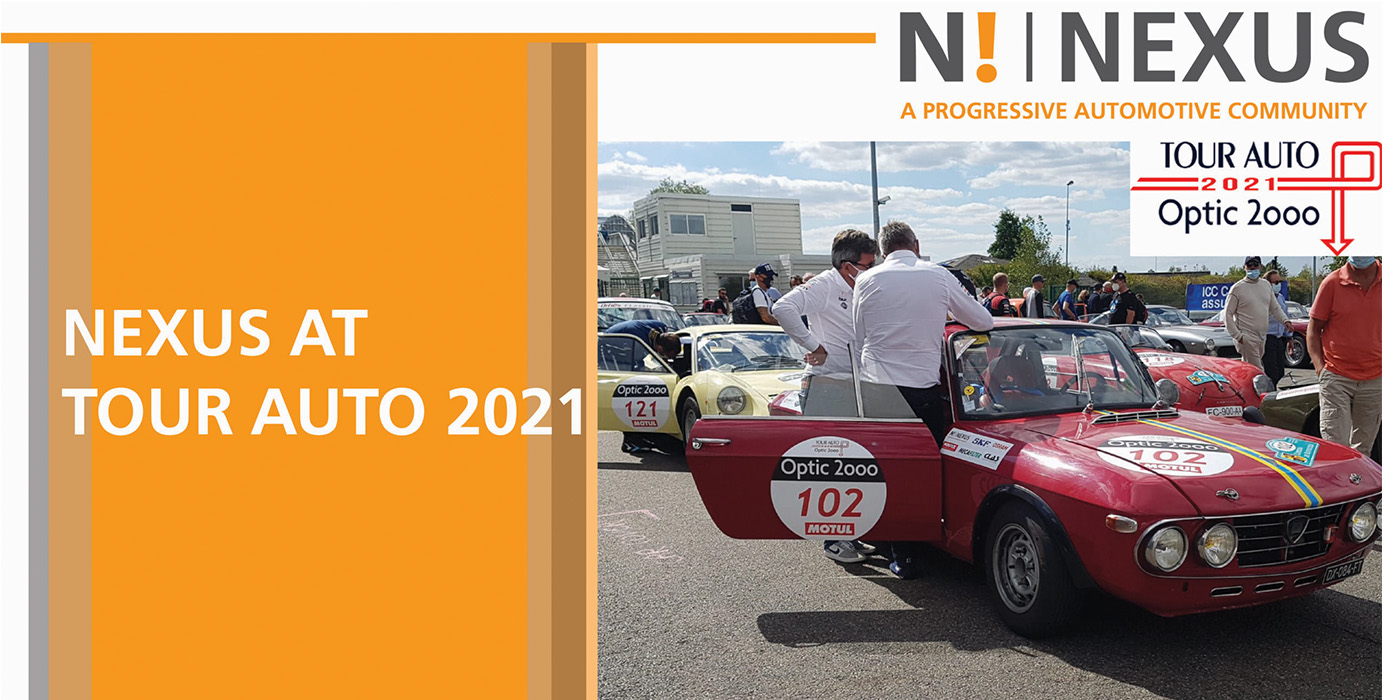 NEXUS Automotive and supplier partners to participate with the Lancia Fulvia 1.6 Rally HF.

From April 19 to 24, the 30th edition of the Tour Auto Optic 2000 will take place, a benchmark rally for classic vehicles. It will take the competitors from Paris to Nice, via Beaune, Aix-les-Bains, Valence and Nîmes.

Driven by Victor Fernandes (Managing Director of the BRS Carrosserie Group) and co-piloted by Gaël Escribe, CEO of NEXUS Automotive International, the Lancia Fulvia in NEXUS colors is setting off to do even better than last year. Victor and Gaël had brilliantly climbed to first place in their category (consistency, Group G), while securing an impressive third place on the podium in the general classification.

Fernandes and Escribe say they are marking their second participation in the Tour Auto under the theme of “the transmission of values ​​and skills.”

“The Tour Auto is a true ode to the automobile. Our profession lacks young talents to maintain everyday cars but also this magnificent heritage. This is why this year we are integrating young people in training into our racing team,” said Escribe.

And these young people are not going to be unemployed, according to NEXUS. They will be responsible for the mechanical preparation of the car as well as assistance during the race.

“We are entering this year with a new car, more powerful than last year,” said Fernandes, who will drive the vehicle. “We are going to spend the three very short months that separate us from the start of the race to completely dismantle the car, inspect each component, make them reliable and possibly replace them.”

The preparation will be provided by two young people, Alexandre and Théo, who are preparing a professional baccalaureate in the ECAUT garage-school in Viuz-en-Sallaz, supported by the Motul Corazón foundation. They will be supervised by Fernandes and the BRS Racing Team, who successfully enter Clios and 308s on all the circuits in France.

The team is coming off a successful season which saw it win the junior category in the Coupe de France Renault Clio Cup placing third overall in the Endurance Tourism Trophy in a Peugeot 308.

Specializing in fleets and B2B, BRS thus processes more than 1,000 vehicles per month on 4 sites (Roissy, Achères, Vélizy and Blyes). With its 70 employees, BRS is thus daily confronted with the problems of recruiting young talents to support its growth.

Beyond these young enthusiasts, the team can count on active and involved equipment supplier partners. These include Borg & Beck, Bosal, Bosch, Clas, Mecafilter, Motul, Koni, Osram, SKF and TMD, who will provide the team with their know-how, their technicians and also their products.

“We would like to thank all of our 2020 partners who have all, without exception, renewed their trust in us. They are joined this year by Borg & Beck (clutch), Bosal (exhaust) and Koni (shock absorbers). Beyond our technical partnership, this year we will be offering them numerous opportunities to expose their brand to the tens of thousands of enthusiasts who line each of the roads making up the course.”

This is obvious because “a classic vehicle deserves the quality of the original equipment manufacturers,” insists Escribe.

For locating rare items not found in its supplier partners’ catalogues, the team can count on Renovatio and its marketplace Bakelit.eu. Over the past two years, the company has formed the leading European purchasing group dedicated to classic vehicle parts. Almost a hundred brands already trust Renovatio, a remarkable figure in just two years of existence.

Thus, exactly 3 months before the start of the Tour Auto, the Lancia Fulvia 1.6 Rally HF in the colors of NEXUS Automotive international and its supplier partners is already mobilizing partners and young talents determined to maintain the memory and passion of the automobile.

Advertisement
In this article:NEXUS Automotive International, Tour Auto
Print
Up Next: