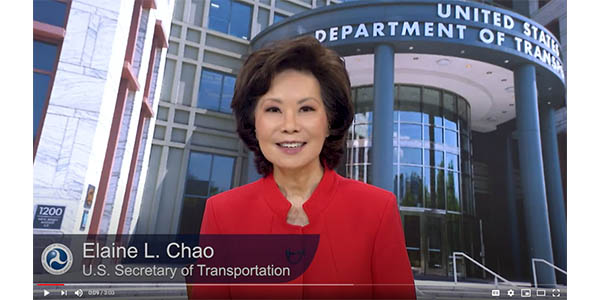 The tracking tool provides data about the on-road testing of automated driving systems in 17 cities across the country.

The U.S. Department of Transportation recently launched a public online tool to improve the safety and testing transparency of automated driving systems.  The new online tracking tool provides data on the on-road testing of automated driving systems in 17 cities across the country, expanding the information available to the public about these vehicles, including their on-road testing and safety performance.

“This tool gives the public online access to data about the on-road testing of automated driving systems so the public can understand more about this new technology,” said U.S. Department of Transportation Secretary Elaine Chao.

The tool is part of the Automated Vehicle Transparency and Engagement for Safe Testing (AV TEST) Initiative, which was announced in June by Secretary Chao. The National Highway Traffic Safety Administration (NHTSA) is overseeing the AV TEST Initiative.

The tool is available at www.nhtsa.gov/avtest.

This online, public-facing platform will allow participants to share testing activities related to automated driving systems and other safety-related information with the public. Online mapping tools may show testing locations at the local, State and national levels, as well as testing activity data, which may include dates, frequency, vehicle counts and routes. Currently, the tool has data on on-road testing activities in 17 cities across the country, including Austin, Columbus (Ohio), Dallas, Denver, Jacksonville, Orlando, Phoenix, Pittsburgh, Salt Lake City, San Francisco and Washington, D.C.

Ten companies and nine States have already signed on as participants in the voluntary web pilot.

“The more information the public has about the on-road testing of automated driving systems, the more they will understand the development of this promising technology.  Automated driving systems are not yet available for sale to the public, and the AV TEST Initiative will help improve public understanding of the technology’s potential and limitations as it continues to develop,” said NHTSA Deputy Administrator James Owens.

“Given the speed with which this technology is evolving, a volunteer partnership with industry and the States has allowed us to get this information to the public quickly and efficiently.  By tapping into the power of the competitive marketplace, non-regulatory tools have proven to be effective in advancing vehicle safety, as evidenced by the success of the Five-Star Safety Ratings program,” he added.

The AV TEST Initiative’s online tracking tool will soon be open to all stakeholders involved in the safe development and testing of automated driving system vehicles. At the state and local level, participants may include departments of motor vehicles, departments of transportation, highway safety offices and city governments. At the automotive industry level, participants may include developers, manufacturers, suppliers, operators and testers.

Advertisement
In this article:Automated Driving, automated vehicles
Print
Up Next: