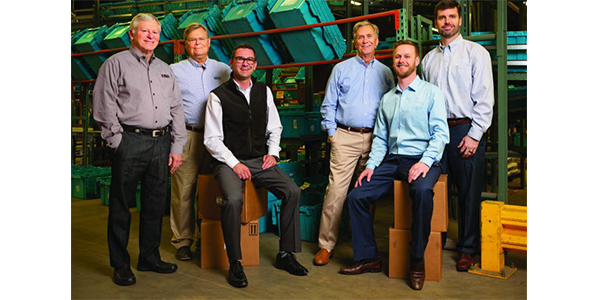 With the fourth generation of the Crow family in the driver’s seat, Crow-Burlingame is celebrating its centennial – and looking ahead to the next one.

At this 100-year-old distribution company, the gray hairs are giving way to the dark hairs.

That’s how CEO Bill Schlatterer (who falls into the former camp) describes the transition taking place at Crow-Burlingame in Little Rock, Arkansas. When Crow-Burlingame marked its centennial in mid-April – during a weekend celebration and joint business conference with the Aftermarket Auto Parts Alliance – Schlatterer announced some major leadership changes, signaling a new chapter for the company.

As Crow-Burlingame looked back on 100 years, Schlatterer told employees,  business partners and friends that the company was turning to the fourth generation of the family to steer it into its next century. Fletcher Lord III – great-grandson of co-founder Bob Crow – was appointed president, taking over the role from Schlatterer, who continues as CEO. Senior Purchasing Manager Ben Butler was named chief operating officer, and Crow Lord – another great-grandson of Bob Crow – was named vice president regional sales.

In other words, the company’s hair is getting darker.

“One of the things that probably sets us apart is this company has never really thought of itself as something that was going to end with one generation of ownership,” says Chairman of the Board Fletcher Lord Jr., grandson of Bob Crow.

Underscoring his point, Lord Jr. recalls how his father, Fletcher Lord Sr., joined the company in 1938.

Lord Jr. took a different tack with his son, encouraging him to “see what the world is like” before settling down in the family business, Lord III recalls. After graduating from the University of Arkansas in 1999, Lord III took a job with NASCAR in North Carolina, and worked there for six years until he decided to come home to Little Rock – and Crow-Burlingame.

Lord III started as a “floater,” working the counter for a few weeks at a time whenever a store needed some help. After several years behind the counter, he became a district manager, and worked his way up to vice president in 2012.

The company’s rich history isn’t lost on Lord III, who considers it “an honor” to be where he is today, following in the footsteps of his father, grandfather and great-grandfather, along with the thousands of others who’ve helped make the company what it is over the years. As he thinks about the future of the automotive aftermarket, he knows it’s no small task to sustain a business for 100 years – and to do it the way Crow-Burlingame has.

The company has enjoyed 100 years of profitability. In all but four years of its history, Crow-Burlingame has increased year-over-year sales. And 2018 was its biggest year yet.

“I’d like to say that I want the company to be around another 100 years, but what about 20 years? What will things be like 20 years from now?” Lord III says, as he ponders trends such as ride-sharing and e-commerce, and their potential impact on the aftermarket. “Things have changed really quickly in the last 10 years – even the last five.”

When Bob Crow and Judge Burlingame founded Crow-Burlingame Co. on April 21, 1919, things were changing quickly too. In 1908, Ford had introduced the Model T, and William Durant had founded General Motors. In 1913, Ford had introduced the moving assembly line, sparking a manufacturing revolution that made cars – hitherto a luxury item – accessible to the average working family.

Good friends who’d met years earlier when they were in the grocery business, Crow and Burlingame started by selling bumpers, seats and other “accessories” to car dealers (back then, cars were delivered in boxes, without steering wheels and other features that are considered standard today). When the automakers began installing those items themselves, Crow and Burlingame shifted to selling repair and maintenance parts – which they knew would be in high demand as the auto industry unleashed millions of new cars on a nation of largely unpaved roads.

From its humble but ambitious beginnings, Crow-Burlingame has become one of the largest independently owned parts distributors and one of the largest Bumper to Bumper affiliates in the nation, with 1,250 employees. Crow-Burlingame operates 177 company-owned stores and three warehouses across Arkansas, Louisiana, Missouri, Oklahoma, Texas, Mississippi and Alabama, and serves 160 independently owned Bumper to Bumper jobber stores.

The company got to this point by always trying to do things the right way, whether big or small things. As Schlatterer and other team members sifted through decades of memorabilia in the runup to Crow-Burlingame’s 100th-aniversary festivities, they unearthed meticulous, handwritten invoices from the earliest days of the company. As they discovered line-by-line sales analyses dating back to the early 1920s, they were astonished by the company’s patient, fastidious accounting practices. From the very beginning, nothing was left to chance.

Over the years, people have asked Lord Jr. how the company could afford to painstakingly calculate its profit margins for every item on every invoice. His response: “How can you afford not to?”

Lord Jr., who served as president from 1974 to 2012, sees the company’s fiscal discipline as another sustaining characteristic.

“A significantly high percentage of the income the company has earned through the years has been plowed back into the company rather than taken out in the form of large bonuses or big salaries,” he explains. “It’s never been a business that was designed for the well-being of one or two while everybody else was a worker bee.”

That’s been a key differentiator for Crow-Burlingame over the years, says Tom Singleton, vice president of company store operations.

“It makes a difference when the philosophy is to run it to benefit you and the company profits, instead of running it to profit the company and we’ll take care of you on the backside,” he says. “It’s a different outlook. That allows us to find good people and retain good people.”

Crow-Burlingame has excelled at the big things too. Acquisitions and mergers – which have played a central role in the company’s growth since the 1970s – have been smart, strategic and deliberate. Many of them took years to unfold.

Lord Jr. says there’s a story behind each and every one of them.

“We’ve never bought anybody because we walked in the door and said, ‘How much do you want for this place?’” he says. “We always had a relationship with them, and over time, something facilitated moving toward the thought of either a merger or an acquisition.”

Over the years, Schlatterer has found “there’s no magic” in the company’s formula for success – just “a lot of hard work.”

“I don’t know that we’ve ever hit a homerun anywhere,” says Schlatterer, who has been CEO since 2012. “We just keep our head down, run the bases and aim for singles and doubles. We try to keep doing what we do pretty well, and we try not to be everything to everybody.”

Lord Jr. sees it much the same way.

“Our expectation is not to get perfect,” Lord Jr. says, “but to get better in a lot of ways every year. Whether that’s in purchasing or marketing or inventory management or what our stores look like, there’s a constant focus on continual improvement in the company, and I think that manifests itself.”

It’s All About the People

Crow-Burlingame’s breadbasket is rural America, and many of its customers are farmers. The vast majority of its business comes from commercial accounts, although Singleton admits the lines between professional and retail customers can be a bit blurry. The Bumper to Bumper/Crow-Burlingame store in DeWitt, Arkansas, for example, “does a phenomenal counter business, but it’s farm and fleet. It’s not your next-door neighbor coming in for an oil filter,” he says.

In a town like DeWitt, if a farm operator breaks down in a field and needs a hydraulic hose, “it’s quicker for them to get in a truck and come get it [at the store] rather than try to explain where they are or how to get there.”

“Real do-it-yourself kind of stuff isn’t our long game,” Singleton says. “But we have an awful lot of people in white pickup trucks that come in our stores, and we take care of them over the counter.”

In the nation’s heartland, strong relationships are the foundation of a healthy business. For Steve DeLancey, store manager at the Bumper to Bumper/Crow-Burlingame store in Springdale, Arkansas, it’s been “all about relationships” since he started with the company in 1984 as a counterman.

Early in DeLancey’s career, a general manager encouraged him to have lunch with a customer every day. DeLancey took the advice to heart. From years of experience, DeLancey says: “You’d be surprised by how many orders you can take on the back of a napkin.”

“Most days, I still go to lunch with a customer-slash-friend,” he says. “We talk about business, and a lot of times when I leave out of there, I might have a napkin stuck I my pocket with an order for parts or even an order for a piece of equipment. A lot of deals were made during lunchtime, I promise you.”

A big part of DeLancey’s loyalty to the company stems from his relationship with Fletcher Lord Jr. and Fletcher’s brother, Bobby Lord. Through DeLancey’s brother, who worked at a Crow-Burlingame store in DeWitt, DeLancey got to know the Lord brothers before he joined the company, and they bonded over their mutual love of duck hunting. Over the years, DeLancey has accompanied the Lords on numerous excursions.

“It’s more like a family operation,” DeLancey says of Crow-Burlingame. “They actually care about the people working for them.”

While Crow-Burlingame is proud of its heritage as a family business, Bobby Lord, a director of the board, emphasizes that the word “family” has a broader definition in this context.

Kenny Payne, vice president of marketing, remembers coming to Crow-Burlingame in 1976 as “an outside guy who didn’t have any family ties or anything like that.” A baseball player in high school, Payne was 18 and still mulling whether to go to college or try to work his way into the minor league system. On a referral from a friend who was a counterman at Crow-Burlingame, he interviewed and got a job, thinking “it wasn’t going to amount to anything other than a job.”

Early in his career, Payne was struck by the company’s people-first mindset, and he saw that it naturally extended to customers.

“The approach always has been if [customers are] successful, we’re going to be successful,” he says.

“Where Kenny’s group excels is we basically provide the same level of support to an independent as we do to our company stores,” Schlatterer says. “And that’s a commitment from the top down. It’s not something we just kind of say, but we actually do that and make it happen. And I think that’s one of the reasons our independent base is as strong as it is.”

That kind of support can’t happen without good people, because, as Singleton puts it, “good people build good relationships. It starts and ends with the people.”

Advertisement
In this article:Crow Burlingame
Print
Up Next: