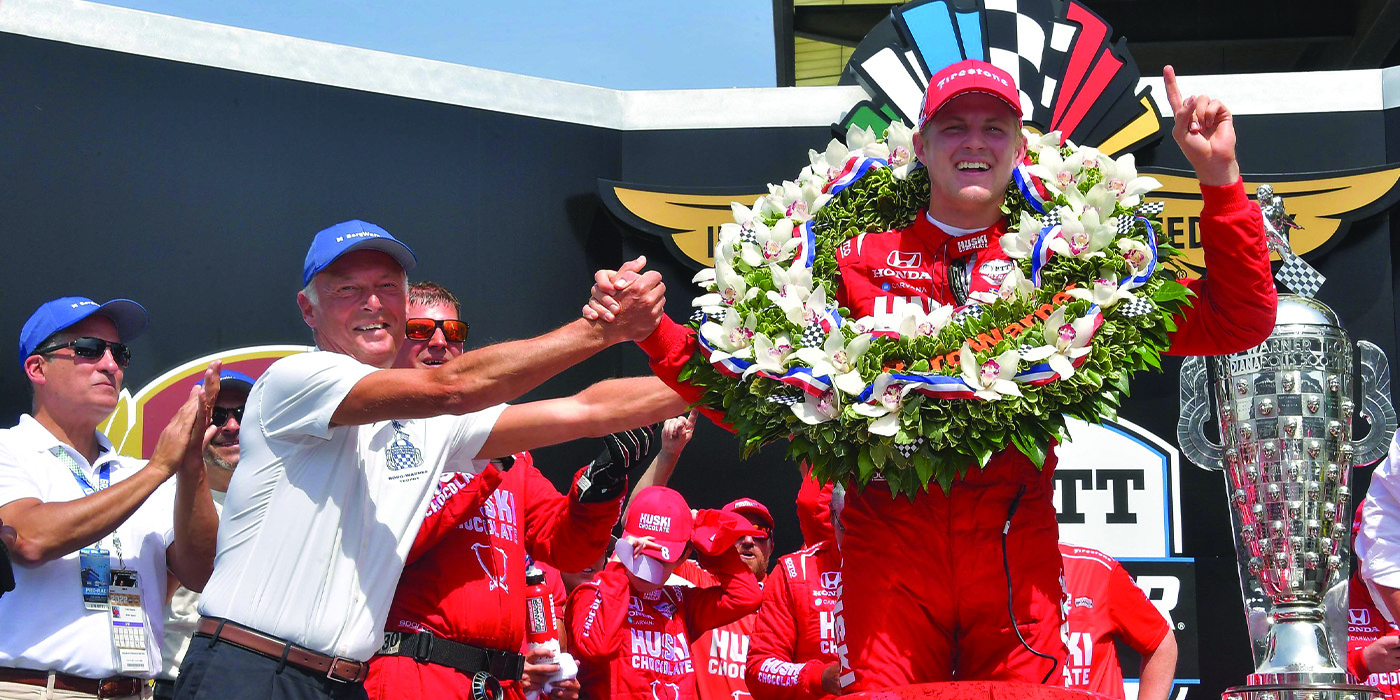 Greeted in Victory Circle at the Indianapolis Motor Speedway, Marcus Ericsson of Sweden, the 2022 Indianapolis 500 winner, was presented with the Borg-Warner Trophy by BorgWarner President and CEO, Frédéric Lissalde. Ericsson who drives for Chip Ganassi Racing, led 13 of 200 laps and averaged 175.428 mph. His was awarded $3.1 million for his thrilling victory in front of nearly 250,000 cheering, enthusiastic fans on a warm, sunny Indiana afternoon.

Keeping up with 85 years of tradition, Ericsson will have his face sculpted and permanently affixed onto the Borg-Warner Trophy. Commissioned in 1935, the Borg-Warner Trophy was introduced at a dinner hosted by the previous Indianapolis Motor Speedway owner, Eddie Rickenbacker in 1936. Since then, the trophy, designed by Robert J. Hill and Spaulding-Gorham Inc. of Chicago, has been an iconic symbol of outstanding racing performance and achievement.

“BorgWarner is honored to present the 2022 Indianapolis 500 winner, Marcus Ericsson, with one of the biggest accomplishments in racing – the Borg-Warner Trophy,” said Lissalde. “This victory represents years of dedication and hard work, which has been exemplified by Ericsson during his career. We are thrilled to be a part of this significant milestone and continue our legacy of helping power this phenomenal motorsport event.”

Ericsson will now join the exclusive club of drivers who have had their face sculpted permanently on the 110-pound sterling silver trophy that stands 5 feet and 4 inches tall. With this accomplishment, winning The Greatest Spectacle in Racing, Ericsson will be the 109th face on the historic Borg-Warner Trophy. For Chip Ganassi Racing, it was their fifth Indy 500 victory. Ericsson started the race in fifth and took the checkered flag topping second place finisher Pato O’Ward from Mexico and teammate Tony Kanaan who finished third. Defending race winner Helio Castroneves, who was aiming for a record fifth Indy 500 win, finished 7th. Ericsson secured victory in his fourth career Indy 500 start, topping his previous best of 11th place in 2021. Ericsson’s victory marks the second “500” victory for a Swede, following Kenny Brack in 1999.

BorgWarner’s involvement in the Indianapolis 500 goes further than presenting the winner a trophy. Since 2012, BorgWarner’s Engineered for Racing (EFR) turbochargers have been featured on every NTT INDYCAR SERIES car. The EFR turbochargers can reach speeds of more than 200 mph throughout the race and provide an incomparable capacity of speed and power.

Advertisement
In this article:borgwarner, Indy 500
Print
Up Next:

Autolite to be Telecast Sponsor for College Nat’l Finals Rodeo