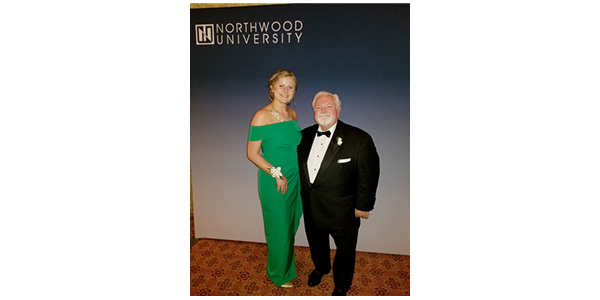 Washbish was officially bestowed the honor at Northwood’s 39th annual ceremony at The Breakers Hotel. More than 200 people including the 2019 incoming honoree class, past honorees, board members and Northwood students, friends and family attended the event.

John R. Washbish accepted Northwood University’s Outstanding Business Leader award at a ceremony on March 16 in West Palm Beach, Florida. He is shown here with Morgen Panning, a Northwood University student who introduced him before the award was presented to him.

“We couldn’t be more excited and proud of John,” said Northwood University President and CEO Keith Pretty. “John is a Northwood man. He has dedicated his life and career to the automotive market. His roots are here at Northwood. We’d like to think that some of his wild success comes from his foundation he received here.”

Washbish was officially bestowed the honor at Northwood’s 39th annual ceremony at The Breakers Hotel. More than 200 people including the 2019 incoming honoree class, past honorees, board members and Northwood students, friends and family attended the event.

The award is intended to recognize leaders in the American free enterprise system. Northwood University Board of Trustees members select awardees based on each nominee’s contribution to the philosophy of private enterprise, support of the integration of business and the arts, contribution to education, economic innovation, creative marketing ideas, community involvement, religious leadership, and philanthropic contributions, as well as business success.

A 50-year industry veteran described by Northwood as an “icon” of the automotive aftermarket, Washbish has been leading the Aftermarket Auto Parts Alliance since Jan. 1, 2010. In the near decade he has spent as president there, he has expanded the company’s international presence first by joining forces with TEMOT International and then by becoming the first program group to create a footprint in China.

Washbish’s industry career began years as a boy at his father’s automotive and heavy-duty warehouse in Louisville, Kentucky. He worked through almost every level of the supply chain, graduated from Northwood University, and began his adult career with AEC Universal Joints.

For the next 35 years, Washbish’s abilities as a leader became more and more apparent as he successfully moved up the ranks at a number of companies, including Michigan Engine bearings, Clevite Engine Parts, Dana Corp. and Affinia Group Inc.

Outside of the office, Washish is just as committed to serving the industry. He has served as president of the Automotive Sales Council and National Engine Parts Manufacturers Association, as chairman of the Young Executive Society and the Manufacturers’ Advisory Council of AWDA, and as a board member for the Motor and Equipment Manufacturers, Automotive Aftermarket Suppliers and Automotive Aftermarket Industry Associations. He currently serves on the AWDA Council of Governors, is senior vice chairman of the University of the Aftermarket Foundation, and is a mentor for the Young Auto Care Networking Group.

Washbish has been recognized for his leadership with numerous awards, including the Automotive Warehouse Distributors Association Leader of the Year in 2004, the Northwood Automotive Aftermarket Management Education Award, and twice being honored with the university’s Alumni of the Year award.

Advertisement
In this article:Northwood
Print
Up Next:

Tenneco Appoints New COO And CFO
Connect with us