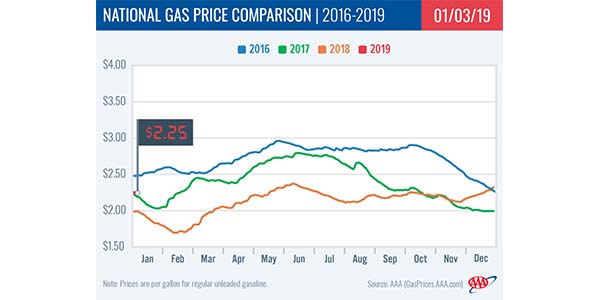 Today, 29 state gas price averages are at or below the national average of $2.25 with Missouri touting the cheapest at $1.83. Hawaii (at $3.34) carries the most expensive average.

The New Year has ushered in the cheapest national gas price average in three years. To boot, at $2.25 today’s national average is even one cent cheaper than on Jan. 1 and trends indicate that pump prices will likely remain cheap for at least the first half of the month.

Today, 29 state gas price averages are at or below the national average of $2.25 with Missouri touting the cheapest at $1.83. Hawaii ($3.34) carries the most expensive average.

“With OPEC production cuts slated to take effect this week, analysts will closely be watching the price of oil,” said Jeanette Casselano, AAA spokesperson. “Significant movement toward higher market prices would mean cheaper gas prices could be in the rearview mirror. However, AAA expects to see minimal volatility at the start of the cartel’s production cuts.”

How Many Americans Know How To Change A Tire?