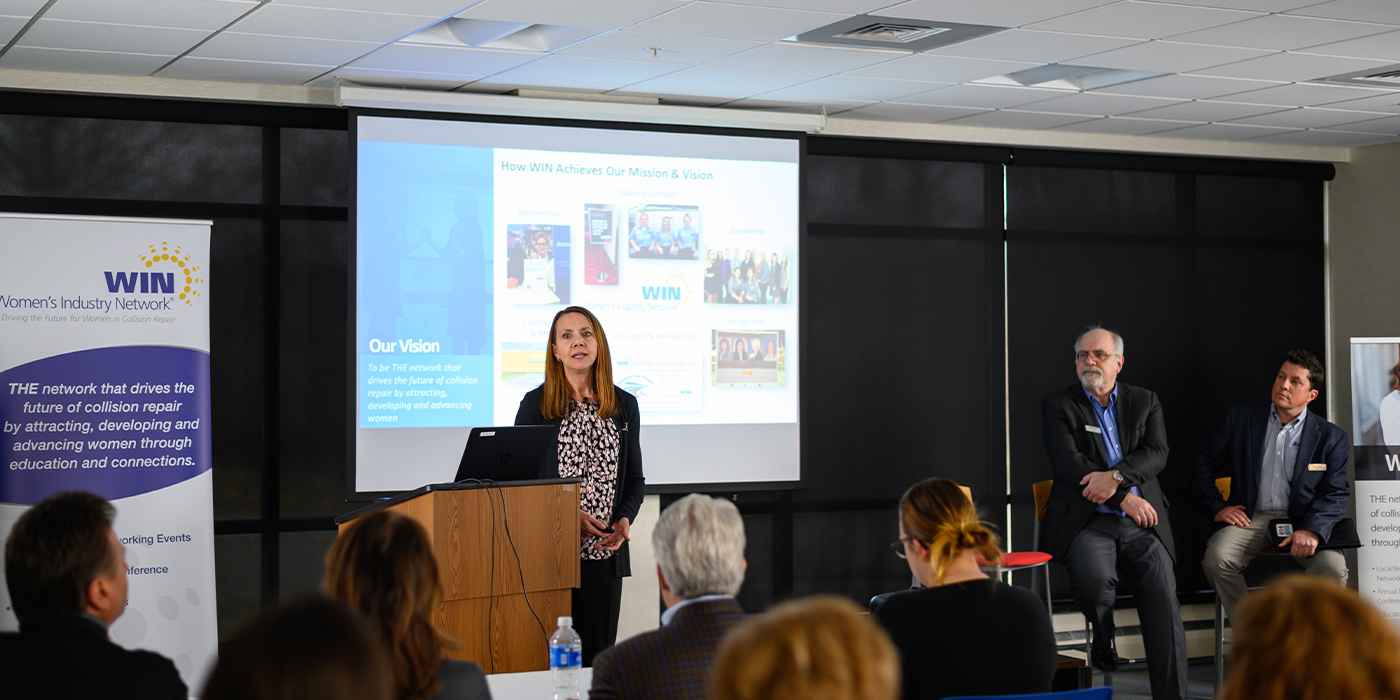 At the event, results of a study on young people’s career choices were unveiled.

BodyShop Business (BSB) hosted a special event at Babcox Media’s Akron, Ohio, headquarters on Wednesday, March 11, in partnership with the Women’s Industry Network (WIN), an association dedicated to advancing women in the collision repair industry. The event focused on the “tech shortage” or skilled trades shortage and unveiled the results of a survey BSB conducted to find out what motivates young people’s career choices. The event also focused on the plethora of job opportunities available for women in the automotive industry.

WIN, along with Falls Communications, commissioned Babcox to conduct a survey on the tech shortage overall with a focus on women. Results of the survey were revealed by Bruce Kratofil, Babcox audience insights manager. The survey was conducted among over 400 participants evenly split among male and female and included two surveys – one among the general population of young people and one that focused on those either working in skilled trades or studying to pursue a career in skilled trades. The two surveys allowed the Babcox Research team to compare differences between the two populations in how and why they chose certain career paths, along with their overall satisfaction levels with that decision.

A panel, including Cheryl Boswell from DCR Systems and chair of WIN, Jason Stahl, editor of BodyShop Business, along with Kratofil, reviewed the data and took questions and comments from the audience. Aime Szymanski, managing editor of BodyShop Business, moderated the panel. Boswell also gave a presentation talking about WIN, how to get involved, the group’s current and upcoming programs and events as well as the variety of job opportunities available for women in the automotive industry.

One notable outcome of the survey showed a much higher confidence level (roughly a 20-point difference) among those young people who chose a career in the skilled trades, versus the general population, when it comes to salary, benefits, job status and satisfaction.

“I think that is good information for us to have as employers. These are the types of things we need to be sharing when we are trying to hire – with job postings and the way we are communicating. If someone is not familiar with this industry and the positions available, they might not realize that,” said Boswell.

WIN was founded in 2006 by a small group of women who wanted to talk about opportunities in the industry and how to support each other. “That was 2006 and now, over the last 14 years, we now have over 500 members, so I think saying that we’ve grown significantly and are still around today show’s that there is a need for an organization like WIN,” said Boswell. She added that the main mission of WIN is to not only attract women to the collision industry but also retain them in the industry and help them advance in their careers.

More details on the WIN/BSB study will be available soon.

Advertisement
In this article:Careers, skilled trades, WIN
Print
Up Next: