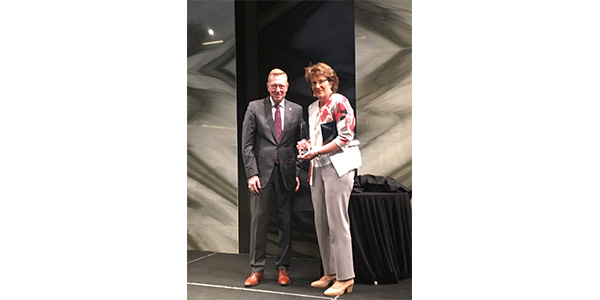 Rep. Walorski has led a vocal opposition against the threat of Section 232 tariffs on automobiles and auto parts and other issues critical to automotive aftermarket suppliers.

The Motor & Equipment Manufacturers Association, which represents 1,000 member companies, gives the award each year to recognize members of the House or the Senate who have worked diligently on behalf of motor vehicle components manufacturer in the United States.

Together, suppliers are the largest sector of manufacturing jobs in the United States with a total direct and indirect employment impact of 4.26 million jobs. The motor vehicle parts manufacturing industry provides more than $270 billion in annual wages and income and $435 billion in economic contribution to the U.S. Gross Domestic Product. There are more than 88,300 Hoosiers directly employed in the motor vehicle supplier industry, and Indiana ranks in the top three states in the nation for supplier jobs.

“Congresswoman Walorski has demonstrated a commitment to advancing our industry and has recognized the critical role suppliers play in the American economy and in the economy of Indiana,” said MEMA President and CEO Bill Long. “She has worked consistently and effectively to ensure that motor vehicle suppliers can remain competitive here in the U.S. and in the global marketplace. Her work has helped us to grow jobs, face trade uncertainty and keep American businesses on the crest of a wave of change that is taking our industry into the future.”

Specifically, Rep. Walorski has led a vocal opposition against the threat of Section 232 tariffs on automobiles and auto parts; has been a champion for importers navigating a difficult exclusion process resulting from the March 2018 imposition of Sec. 232 tariffs on raw and semi-finished steel and aluminum; has served as a leading congressional voice calling for an exclusion process for companies paying Section 301 tariffs on the $200 billion of Chinese imports; and has opposed the creation of a border adjustment tax during the 2017 consideration of tax reform legislation.

“Indiana is a leader in American manufacturing, and vehicle component suppliers help drive our economy and create good jobs for hardworking Hoosiers,” Congresswoman Walorski said. “I’m honored to receive the Joseph M. Magliochetti Industry Champion Award, and I’m grateful to the Motor & Equipment Manufacturers Association and its members for their efforts to keep this industry competitive and maintain our nation’s economic momentum. I look forward to continuing our work together to ensure our trade policies provide long-term certainty for suppliers so they can keep building made-in-America products.”

Congresswoman Walorski is currently the representative of Indiana’s Second District. Her political career began in 2004, when she was elected to her first of three terms in the Indiana House of Representatives. She was elected to the United States House of Representatives in 2012. Currently, in her second term in Congress, she serves on the House Armed Services, Veterans’ Affairs, and Agriculture committees. She also chairs the House Subcommittee on Nutrition.

The Industry Champion Award is presented in the memory of Joseph M. Magliochetti, a former MEMA chairman who also served as the chairman and CEO of Dana Corp. until his death in 2003. He was widely recognized as a leader and a visionary in the supplier industry, and his tenure as MEMA’s chairman left a legacy of advocacy and outreach on behalf of motor vehicle suppliers. This annual award recognizes a member of the House or the Senate who has worked diligently on behalf of parts manufacturers in the United States. Past Industry Champion Awards have been presented to Senator Lindsay Graham (R-South Carolina), Congressman Bill Huizenga (R-Michigan), Congressman Dr. Michael Burgess (R-Texas) and Senate Majority Leader Mitch McConnell (R-Kentucky).

“MEMA is pleased to recognize Representative Walorski’s efforts with this award, which carries great significance within our industry,” Long said.

Advertisement
In this article:awards, MEMA
Print
Up Next: