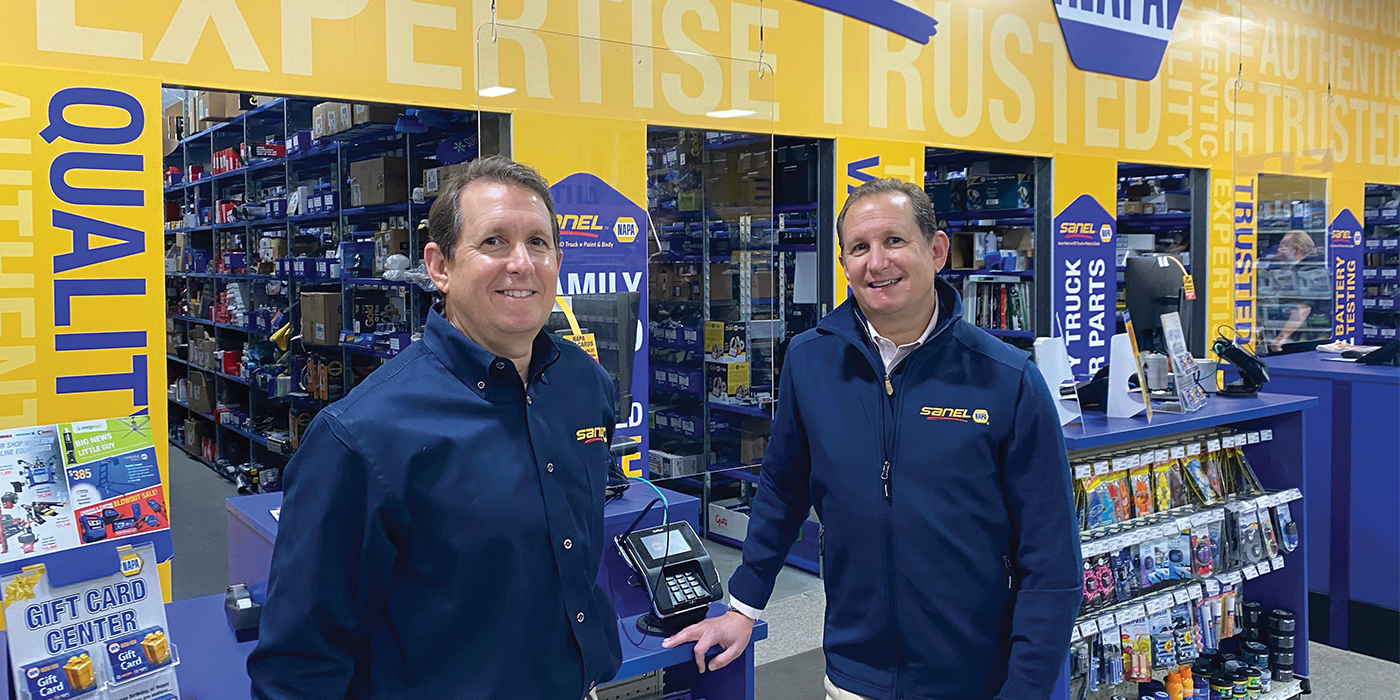 David and Bobby Segal use 100 years of family business experience to shape the future of Sanel NAPA.

All successful business enterprises share one common goal: to fill a need in the marketplace. For the Sanel NAPA family, staying one step ahead of changes in Concord, New Hampshire, where the business is based, has been a critical element in the company’s success for the past 100 years.

In the late 1800s, Concord was a small but prospering manufacturing hub. The most dominant form of transportation at the time was the stagecoach. Concord eventually became known for this mode of travel when a wheelwright named Lewis Downing partnered with a carriage maker named J. Stephen Abbot to form a business in 1826 called Abbot-Downing, also known as the “Concord Coach.” Costing between $1,000 and $1,500 apiece, hotels would purchase the coaches to transport guests back and forth from the railroad station. As the country moved West, the coaches also became widely used by express companies, such as American Express, and Abbot-Downing’s biggest customer, Wells, Fargo & Co. (The Concord Coach can still be seen in the Wells Fargo branding to this day.)

As horse-drawn transportation died out, and Henry Ford discovered a way to mass-produce combustible engines, Abbot-Downing started producing cars, trucks and eventually fire trucks, but it was too late.

“They didn’t adapt their business quick enough,” said David Segal, president of Concord-based Sanel NAPA, whose family ended up buying the assets of Abbot-Downing as well as the building of Holt Manufacturing Co. in the early 1900s. Incidentally, Benjamin Holt patented and manufactured the first continuous tracked tractor, which led to the establishment of the Caterpillar brand.

Segal noted that not only was Sanel NAPA created from the “descendants of a company trying to get into car manufacturing,” but Concord itself can credit much of its history to these men.

In 1920, as the winds of change began to transform transportation even more, father and son team Benjamin and Edward  Sanel saw opportunity. The two men opened Sanel Auto Wrecking Company in Concord, selling new and used auto parts, scrap iron and metal to the local community.

“Living in Northern New England, in the 20s into the early 30s, the way parts got moved was through the trains. That was the availability then. So, as the car parc grew, if something fell apart, how do you get the part to fix it? The whole distribution model of new parts and the whole supply chain we have now wasn’t even contemplated yet. Back then it was just, buy a car and figure out how to fix it,” said David Segal.

Benjamin and Edward Sanel were the great-grandfather and great-uncle, respectively, of David and Bobby Segal, twin brothers who run the family business today and are celebrating not only their family’s rich heritage in the industry, but 100 years in business this year.

Edward also had a sister named  Bella Sanel. Bella married a gentleman named David Segal. After her husband passed away unexpectedly, Bella moved back to Concord to join the family business, managing the company’s finances.  Bella and David Segal’s two sons – George and Norman – also came to work for the family operation. Over the years, George Segal, Bobby and David’s father, became a well-known and highly respected figure both in the automotive aftermarket as well as in Concord.

In 1933, the Sanel family shifted their business into something closer to what the company resembles today. They expanded operations by buying an auto parts store in the area. Things went swimmingly during the 30s, until World War II happened.

“World War II came, and it was hard to get products,” said Bobby Segal, CEO of Sanel NAPA. “They were selling pretty much anything at that point. They had a machine shop, a spring shop, a glass shop. But the business also morphed into selling refrigerators, similar to Western auto, where they had a little of everything. That was a survival skill. Just to survive the war time in and of itself, I thought, was miraculous.”

“If you look at our history and why our company has done so well in surviving a hundred years, it’s because we’ve always embraced change,” said David Segal. “That’s how our great grandfather, our great uncles, great aunt, grandmother, father and uncles were able to survive, because they expanded the business where there were other opportunities.”

This survival instinct led the Sanel/Segal clan to not only begin selling in neighboring communities and add services, but to add other types of products into the mix, including Simplicity tractors, Huffy bikes and a distributorship for Yamaha motorcycles. At the core, however, the focus was always on auto parts, including new, used and reman.

From 1933, when they acquired Linscott Auto Supply Co., and changed the name to Sanel Auto Parts Co. Inc., the Sanel/Segal family continued to grow and thrive, adding more office space and new locations while adapting to changes in the state’s economy. In 1948, the original Sanel Auto Wrecking Co. was sold and the company was reorganized as Sanel Paint and Machine Supply Co.

In the 1950s and 60s , New Hampshire’s population grew quickly, transforming from a state known for light manufacturing to a burgeoning high-tech region. From 1961 through 1979, Sanel added some 30 locations to its roster.

“In the early 50s, we were the dominant player in New Hampshire and parts of Vermont,” said David Segal. “But, there were other strong players in Northern Vermont, Maine and surrounding Boston. They teamed up to start one of the first buying groups, called Associated Parts. That got into functional discounts and performing a function of redistribution, where you had retail stores and then you had the warehouse and they both were different names. What’s interesting is, we still have the notes from those buying groups and the issues they had then are the same today: ‘Our volume justifies a better discount. We’re doing all these things for us to stay competitive … ’”

David Segal added that while the business was able to keep going over many decades by selling a variety of products, he and his brother Bobby have focused the business on auto parts, paint and heavy-duty truck parts over the past 20 years. And, things are “clicking,” as he put it.

As the company’s 100th anniversary drew near, Bobby and David Segal and the Sanel management team began contemplating where they wanted to see the business going. “One of the things we came to realize is that we spent so much time focusing on working with the manufacturers and the buying groups, we got farther and farther away from the customer,” said David Segal.

“NAPA came to us with some needs because their market share in New Hampshire and Vermont is weak. And so, we asked ourselves, ‘Where’s this industry going to be in 10 years?’ For us, in our territory, it was all family businesses at one time. We’re the last one standing. Their all gone. They’ve all sold out,” said David Segal.

“We came to the realization after talks with NAPA for a couple of years that we want to get back to the roots of the business, which was taking care of, and having relationship with, the end-user, whether it be retail or commercial, mostly commercial,” he added.

In early 2018, Bobby and David Segal made the leap. Under its new name, Sanel NAPA would continue to be independently owned and operated by the Segal family, the fourth generation to lead the company. “What helped us make the decision,” Bobby Segal said, “is that we felt we had the same values and belief systems [as Genuine Parts]. And we found that they had the best alignment for us to grow.”

With the new partnership came the opportunity to purchase eight additional NAPA stores – three in New Hampshire, four in Maine and one in Massachusetts, bringing the company to more than 49 locations in all today. Sanel NAPA is now a single source for more than 525,000 quality parts, sourcing products and services from more than 1,600 manufacturers from multiple distribution centers, with improved retail and wholesale merchandising programs.

At the time of the announcement in 2018, Gregg Sargent, eastern division vice president for Genuine Parts Co.’s U.S. Automotive Parts Group, commented, “It’s a natural fit for Sanel and NAPA to come together. Each are strong brands with an over 90-year legacy of quality, excellence and service. Customers will benefit from NAPA’s breadth and depth while continuing to enjoy the local service and attention they have come to expect from Sanel.”

David Segal said they finished the two-year transformation this year, moving from a large distribution center into a building that’s 40,000 square feet and supports the hub and spoke distribution model. “We’re excited about it,” he said. “It’s not an easy transformation. But the whole idea is having all the different tools we can leverage to bring the customer closer to us.”

The two brothers say they are looking forward to continuing the company’s presence in the local community but with increased efficiency and more streamlined operations.

“We could have easily sold out. We had a lot of people knocking on the door. But we felt there was still a place for the owner/operator model, a family business with a local presence,” said Bobby Segal.

Bobby and David Segal consider themselves stewards of the business. They are dedicated stewards of the aftermarket as well. Both previously served terms as chairman of the Automotive Warehouse Distributors Association, and are Lifetime Trustees of the University of the Aftermarket Foundation.

“We’ve always been connected to the communities,” said Bobby Segal. “We [the Sanel/Segal family] were one of the original four founders of the Boys and Girls Club, which the family helped start in the 40s, and longtime supporters and board members of the Concord Hospital System since the early 50s. We support everything from the United Way, the arts, market-rate housing projects, maker-spaces units around the state to the Black Heritage Trail in Portsmouth, New Hampshire. We may not be the highest self-promoters, but what we do is we put our money where our mouth is, fostering the long-term belief system of always giving back to the communities we serve.”

Reflecting on the company’s centennial, David Segal added that it’s not simply about the legacy of the Segal and Sanel names. It’s about the patchwork of people who have helped get them to 100 years.

“Success is not about our family,” said David Segal. “Success is about all the people we have worked with over 100 years. Some of them are multi-generation families that have worked for the company. The company’s success has been based on the fact that it is a family environment, empowering the employees to be leaders themselves.” AMN

This story was originally posted in the December 2020 issue of AMN Magazine. View the full issue here.

Advertisement
In this article:cover story, Sanel NAPA
Print
Up Next:

Building A Legacy Of Community Service

AAPEX 2020 Tech Of The Year Known For Perseverance, Hard Work

Icebreaker: Ryan Samuels, On the Value of Associations

Automotive Technician Vs. Mechanic: What’s The Difference?
Connect with us