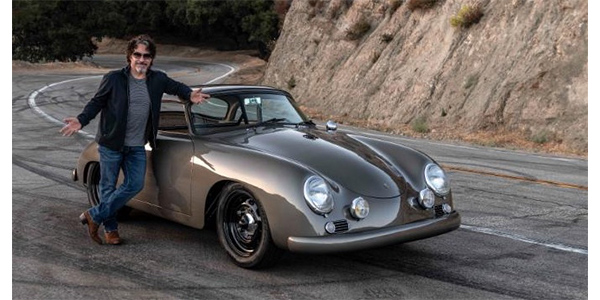 Hall & Oates guitarist’s custom 1960 Emory Outlaw Porsche 356 will be featured with other rock-star cars and a custom guitar to be auctioned.

Rock And Roll Hall Of Famer and longtime automotive enthusiast John Oates of the legendary duo Hall & Oates is curating a special exhibit at the 2019 Amelia Island Concours d’Elegance. “Cars of the Rock Stars” will feature Oates’ custom 1960 Emory Outlaw Porsche 356 Cabriolet alongside famous cars owned by notable musicians with some of the guitars they played. Other cars in the exhibit include Janis Joplin’s Porsche 356 Cabriolet, Billy Gibbons’ (ZZ Top) Cadzilla Cadillac, Brian Johnson’s (AC/DC) Bentley, and Elvis Presley’s Corvette. These hand-selected cars are part of the 225 pre-1974 vehicles chosen for display at the 2019 Concours d’Elegance, held March 9-10 at the Amelia Island Ritz-Carlton Hotel.

“Throughout my life I have always had two major passions,” Oates said, “Driving cars and playing guitars. Both the machine and the instrument are paragons of inspired and purposeful design. Both tell their unique story historically and culturally. Both have their roots in the late 19th century, evolving and continuing to fascinate and excite through the 20th and now into the 21st centuries. I’m very proud to have the opportunity to collaborate and curate this unique collection with Chris Brewer and the Amelia Island folks.”

Oates will also have several guitars from his personal collection on display. To benefit the Concours’ charitable foundation – which supports several North Florida organizations –  he will auction a special Fender Player Stratocaster painted with a custom image of his Porsche 356.

Worldwide airbrush-supply leader David Monning of Coast Airbrush teamed up with renowned artist Ryan “Ryno” Templeton to apply the image of Oates’ 1960 Porsche 356 Emory Special on the Stratocaster. When a switch is flipped, the paint comes to life on the guitar.

Oates will auction this special guitar during the exclusive Mercedes-Benz Cocktail Reception and Gala Dinner at the Amelia Island Ritz-Carlton on Saturday, March 9. For more information on the 2019 Amelia Island Concours d’Elegance,  visit ameliaconcours.org.

Advertisement
In this article:Classic Cars
Print
Up Next:

Registration Open For AAPEX 2020
Connect with us