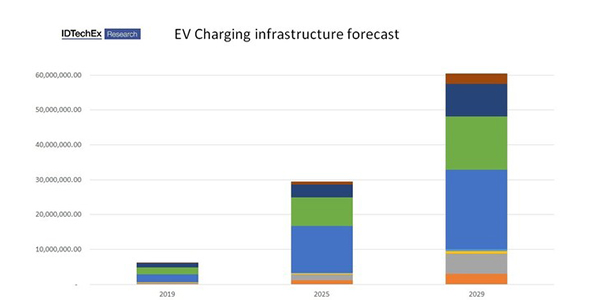 IDTechEx estimates that approximately 60 million electric vehicle chargers (both public and private) could be deployed in the global market by 2029.

According to IDTechEx research, the EV charging infrastructure value chain will evolve as the integration of both electric vehicles and renewable energy goes forward. Challenges and opportunities arise when this happens, as there will be increasing requirements for operating the electricity network in a smarter way. For this purpose, concepts like demand-side management and key enabling technologies like energy storage will have a key role, according to the firm.

The emergence of the autonomous, shared vehicle and ride-hailing platforms will change the needs of charging infrastructure. So what charging technologies can come forward to satisfy these special needs? What will be the overall impact of these technology trends in the future global vehicle population? IDTechEx believes that at some point shortly after 2030 the world might reach a peak in vehicles, in relation with the emergence of autonomous and shared vehicles. This raises the question as to whether an autonomous vehicle will still require a man-operated electric vehicle charger. The answer is probably not, IDTechEx says, as initiatives are underway to replace man-operated charging infrastructure. This includes technologies like inductive charging and robotic charging. The possibilities of capacitive charging are being discussed as well, a new concept for charging electric vehicles through electric fields rather than magnetic, being developed by ARPA-E. One very interesting start-up is integrating magnetizable materials in concrete for wirelessly charging electric vehicles dynamically.

What does IDTechEx mean by this? The firm says the future will not be fully energy autonomous, but given the increasing performance of energy harvesting technologies it foresees a future in which electric vehicles will be capable of recharging themselves by harvesting energy from the environment and therefore become less reliant on grid-based charging infrastructures. Companies like Toyota, Hanergy and IFEVS are working in extending the range of electric vehicle by integrating energy harvesting technologies in them, from solar photovoltaics to small-scale turbines.

Depending on how these trends may evolve in the following 10 years there may be points in time of peak and decline of car populations and required charging infrastructures.

Find out more at IDTechEx.com/evcharge.

Advertisement
In this article:EVs, Infrastructure
Print
Up Next:

IDTechEx: The State Of The Electric Vehicle Charging Infrastructure