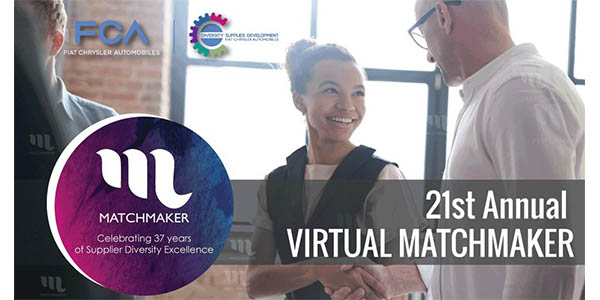 The event was attended by more than 150 exhibitors, 600 attendees and 100 FCA decision-makers.

“MatchMaker has been a flagship component for our award-winning supplier diversity program for more than 20 years,” said Mark Stewart, COO, FCA – North America. “It is a powerfully effective program that is based on a very simple idea that a company can optimize the economic impact of its business with diverse people and communities that represent its customers and employees. So, after 20-plus years it may not seem so breakthrough or unique, but the values MatchMaker represents are timeless and perhaps never more important than they are right now.”

MatchMaker has generated more than $4 billion in new business opportunities for minority-owned, including women, veteran, LGBTQ and disabled, and small businesses since its inception in 1999.

Since 1983, the company has purchased more than $80 billion from minority-owned, women-owned and veteran-owned suppliers. In 2019, FCA in North America spent more than $8 billion with 300-plus diverse suppliers and received the following honors for its supplier diversity efforts:

For more information or to register your diverse business, visit supplierdiversityfca.com.

Advertisement
In this article:Fiat Chrysler Automobiles (FCA)
Print
Up Next:

Events: How To Capture The Real Value Of A Virtual AAPEX Experience

Registration Now Open For Virtual HDAD 2021
Connect with us