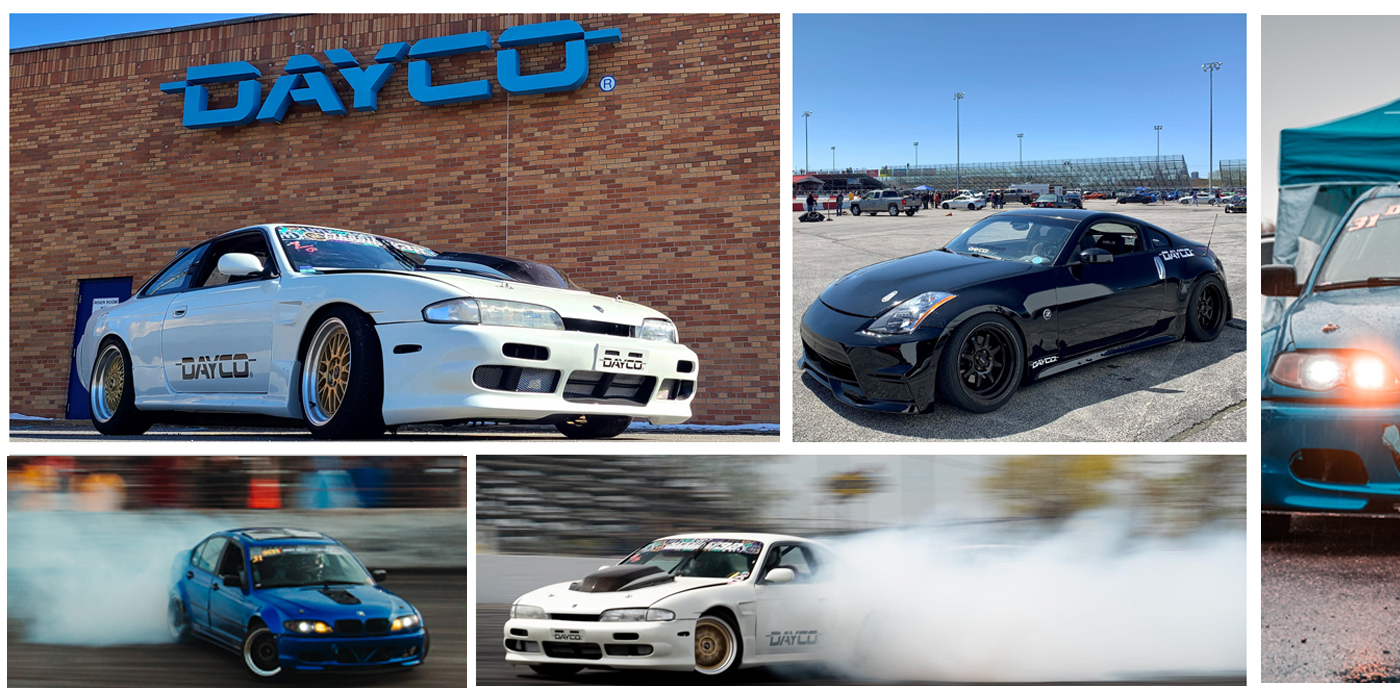 Dayco, a leading engine products and drive systems specialist for the automotive, industrial and aftermarket industries, is diversifying its motorsports program by sponsoring five of the hottest drift race teams on the circuit today.

“Drifting has continued to gain momentum over the past decade and is the fastest-growing extreme sport in the world. We see a huge opportunity to showcase Dayco’s performance and durability with a younger generation of vehicle enthusiasts who may not be as familiar with our products,” said Jay Buckley, director of Product Management, Dayco, NA Aftermarket. “More than 2,500 engineering hours go into the design, development and rigorous testing of every one of our products and we’re confident that they can handle the high RPM operation and incredible loads generated during drifting’s intense driving conditions.”

In addition to providing the following race teams with financial support and high-performance belts, water pumps, tensioners, pulleys and racing balancers during the 2021 season, Dayco’s product and R&D teams are on call for any technical support the crew or drivers may require throughout the season.

Below are the five teams Dayco will be supporting:

WingIt Motorsports – Andrew Lewis from WingIt will be taking to the track with his 2003 Nissan 350Z, which is powered by a 418 WHP LS engine. He started competing in 2012 and has garnered several awards, including Third Place – Formula Drift Pro 2 Championship, for being an outstanding competitor. As a sponsored driver with Dayco, Lewis is committed to promoting the sport and widening his fan base both online and at drift events, including the NoStar Bash and Drift Indy series.

Chad Andersen Motorsports – Driver Chad Andersen is racing at Auto City Speedway and Michigan International Speedway with his modified 2002 BMW 325I with 5.0L Coyote engine and Roush R2300 supercharger. His vehicle will also be outfitted with Dayco’s serpentine belt, supercharger belt and accessory belt. “Dayco’s racing history puts these products to the test and I am confident in their capabilities during the high demands of drifting.”

Messineo Motorsports – A lifelong fan of motorsports, Mike Messineo’s passion for drifting started when he was in college. He’ll be competing this year in the MI Drift and No Star Bash along with the Drift Indy series with a 1996 Nissan 240SX with a built 6.0L V8 LQ4 engine. “I’m very thankful to have such a great company on our team this season. We have been installing Dayco components on our vehicles as we prepare for the upcoming season and love how parts like their water pumps come with new hardware, gaskets and other needed items that you typically have to buy separately. This and their quality really help to keep our maintenance and repairs moving forward quickly and smoothly.”

Advertisement
In this article:motorsports partnerships
Print
Up Next: