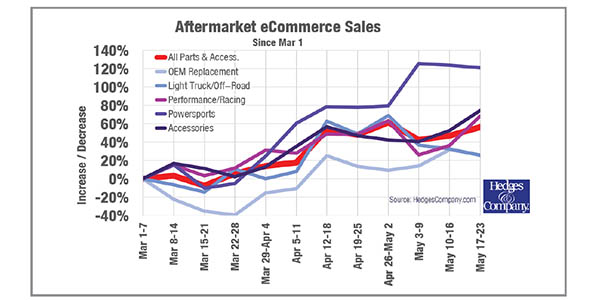 Coronavirus stay-at-home orders kept most people off the streets from March through May, and many retail businesses suffered for it, even if they were allowed to remain open. The automotive aftermarket was no exception, with companies such as Advance Auto Parts, Genuine Parts Co. and O’Reilly Automotive reporting quarterly sales declines compared to last year.

However, just because in-store sales may have dropped or not hit the benchmarks companies were expecting, sales didn’t plummet altogether. In fact, Jon Hedges, principal of Hedges & Co., notes that the loss in foot traffic was offset by online activity.

According to Hedges & Co., which analyzed more than 13 million online user sessions and purchases for automotive parts and accessories websites (including retailer websites and manufacturers selling direct-to-consumer), compared to the week of March 1-7, 2020, online revenue during the week of May 17-23 showed a 56% increase. In comparison, the same week in 2019 (May 19-25) illustrated a 1% decrease from the first week of March 2019.

“For years, eCommerce adoption in the automotive aftermarket has been slightly behind most other industries,” Hedges explains. “It’s been that way since the beginning of eCommerce. That completely changed in just two months. It would have normally taken several more years to get to where we are right now. Today, eCommerce market share in the automotive aftermarket is where we forecasted it to be in 2022 or beyond.”

The increase in sessions and sales during the end of April and beginning of May averaged about 50%, with the biggest increase being the week of April 26 to May 2, which showed a 61% increase over the first week of March. This significant increase only came, however, after stimulus checks started being released (the first wave dropped in Americans’ bank accounts the weekend of April 11-12).

Hedges & Co. found these patterns during the 10th week of the analysis (May 17-23) in comparison with the first week of March:

• OEM replacement-parts sales saw decreases for the first five weeks and only went positive during the week stimulus payments began appearing. These sales had a 26% increase

• Light-truck and off-road parts sales saw a 26% increase (down from a 37% increase two weeks prior).

• Performance/racing parts sales were up 69%.

• Powersports saw a whopping 121% increase, which Hedges attributes to seasonal sales and the fact that powersports enthusiasts can practice social distancing while riding.

When comparing the first 10 days of May to March, Hedges & Co. found that the pages-per-session metric on these websites was only up 0.8%, while the average duration dropped 1.4%. However, average conversion rates improved 11.1%.

Together, these metrics suggest that shoppers knew what they wanted to buy, since they were spending less time browsing. Furthermore, the number of new visitors to these websites increased by 6% from March.

Although the world is starting to open back up, it’s doing so slowly — perhaps more slowly than anyone would have expected just a few months ago. As a result, everyone is searching for the “new normal,” and for aftermarket parts companies, this data indicates that a solid digital presence is a must.

“Aftermarket companies must have a comprehensive digital strategy,” Hedges concludes. “That includes the obvious: a good website and a good online presence. But a strong digital strategy requires a plan for all digital channels, including social, organic, display, email and others. It requires great product data and a separate set of data for a manufacturer’s website. It requires a plan to stay on top of the ever-changing aftermarket requirements for Google Shopping. It requires measuring ROI on all marketing investments. Actions taken by aftermarket companies in the next six months will determine the winners for the next decade.”

Advertisement
In this article:Coronavirus, eCommerce
Print
Up Next:

US Gasoline Demand More than ‘Halfway’ Back