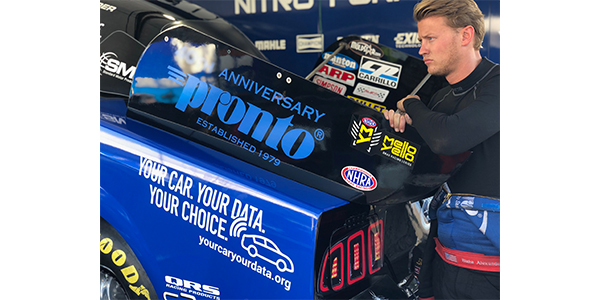 Alexander, Allgaier and Schrader will attend a Thursday evening reception on Capitol Hill, where they will meet-and-greet summit attendees and lawmakers.

During the two-day summit, hundreds of Auto Care members from across the country will meet with their congressional representatives to discuss the independent aftermarket and its most critical policy priorities, including the right to access vehicle data.

Alexander, driver of the Nitro Funny Car, is a two-time Top Fuel Champion. In August, Auto Care’s “Your Car. Your Data. Your Choice.” campaign partnered with him as co-primary sponsor of his dragster for the NHRA Northwest Nationals in Seattle, Washington.

“I’m excited to participate in this year’s legislative summit and continue my part to raise awareness about the car data issue,” said Alexander. “It’s going to take more than face-to-face meetings with Congress to protect car owners, but it’s a great start – and a great show of unity within the industry.”

Allgaier currently competes full-time in the NASCAR Xfinity Series, driving the No. 7 Chevrolet Camaro for JR Motorsports. He was the 2008 ARCA Re/Max Series Champion and the 2009 NASCAR Nationwide Series Rookie of the Year. His most recent wins include placing first in the 2017 NASCAR Xfinity Series and the Chicagoland Speedway.

Before retiring in 2013, Schrader raced in the NASCAR Sprint Cup Series for 32 years. In that time, Schrader raced in over 1,000 races, winning numerous awards and achievements. Currently, he races on local dirt and asphalt tracks nationwide, and drives part-time in the ARCA Racing Series and the Camping World Truck Series.

To attend the summit and reception, Auto Care members can register for $295 here.

Advertisement
In this article:Auto Care Association, Legislative Summit
Print
Up Next: