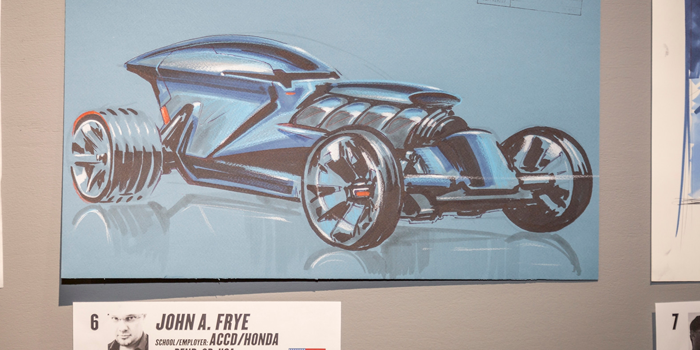 John Frye, a principal designer and digital modeling group leader for Honda R&D Americas Inc., was named the winner of the Middlecott Sketchbattle Experiment Los Angeles, presented by BASF. Known as the “Fight Night of Design,” the Sketchbattle experiments, which originated in Detroit, are held to help identify emerging automotive design talent.

The Los Angeles event, which marked the first time the Sketchbattle was held outside of Detroit, coincided with the Los Angeles Auto Show. Seventeen contestants competed in the automotive sketch battle, which was held in a high-pressure format in front of a live audience.

“The Sketchbattle competitions not only emphasize the skill and creativity of future talent, they also offer an energizing platform to help build enthusiasm for the automotive design community,” said Paul Czornij, head of design for the BASF Color Excellence Group and one of the event judges. “As a leader in color design for the auto industry, we enjoy supporting such a creative and thrilling event.”

The Sketchbattle competitions consist of three rounds, with each round themed differently. Approximately half the contestants are eliminated in each round as their sketches are judged by a panel of automotive design experts.

For the final round, the four remaining contestants were asked to incorporate BASF’s 2017 Color of the Year – Reflexion Nebula, a color that transitions from blue to gray depending on the vantage point – into their sketches. The four finalists were Frye, defending Sketchbattle champion Omar Gonzales, Rodrigo Galdino, a designer at Karma, and Chris Lah, a student at the Art Center College of Design.

“During the final round, I didn’t have a specific plan other than using the BASF blue on something like a hot rod – adding future thinking to a reinterpretation of classic proportion,” said Frye, who also studied at the Art Center College of Design before starting his career. “Winning the Sketchbattle was stunning and energizing for me. I feel the experience is an endorsement of the skills and encouragement from the teachers and supportive people in my life. As designers, we do not evolve in a vacuum, we owe a lot to those who teach us and mold our creativity.”