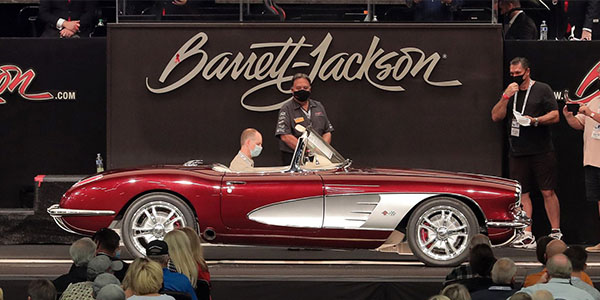 During the auction, the 100-percent No Reserve docket included 442 vehicles that sold for more than $23.5 million.

Barrett-Jackson, The World’s Greatest Collector Car Auctions, returned to in-person events during the Fall Auction at WestWorld of Scottsdale, Oct. 22-24, with a safe and highly successful auction.

During the three-day auction, the 100-percent No Reserve docket included 442 vehicles that sold for more than $23.5 million, while 349 pieces of automobilia brought in more than $634,000 and $845,000 was raised through the sale of three charity vehicles, bringing the total amount sold on the Barrett-Jackson auction block to more than $24.9 million. In addition to the online and global TV audience, the bidders, consignors and invited guests who attended lauded Barrett-Jackson for the extraordinary measures taken to make them comfortable about their health and safety.

“We’re so thankful for the bidders, consignors and guests who joined us for our first in-person event since January,” said Craig Jackson, chairman and CEO of Barrett-Jackson. “The feedback from our attendees was overwhelmingly positive. Our guests were sincerely appreciative of the efforts we took to put health and safety at the forefront during this auction. Working closely with the City of Scottsdale and officials from WestWorld, we demonstrated that we could host live events and maintain the highest standards of safety. We’re excited to carry this excitement into our January 2021 Scottsdale Auction.”

The 2020 Fall Auction featured three private collections and produced 27 world auction sales records, including the auction’s top seller, a 2018 Ford GT (Lot #748) that sold for $1.21 million. On Thursday, world-champion rallycross driver Ken Block was on the block to help auction his 2016 Ford Focus RS RX (Lot #3000), which sold for $200,000 to benefit Team Rubicon. Nearly 20 hours of live auction coverage premiered on A+E Networks across FYI and HISTORY, while Barrett-Jackson.com streamed all the cars, all the time.

The top vehicles, all selling at No Reserve, during the 2020 Fall Auction:

“It was such a joy to be back on that auction block and watch enthusiastic bidders light up when their dream car crossed the stage,” said Steve Davis, president of Barrett-Jackson. “We proved that it’s not only possible to produce a live event where guests feel safe, but that the collector car community remains vibrant and the market is resilient and healthy.”

A total of $845,000 was raised for charity with the sale of three vehicles during the Fall 2020 Auction. To date, Barrett-Jackson has raised more than $127 million for more than 170 organizations nationwide. The three charity vehicles included:

“We applaud the great lengths Barrett-Jackson took to follow local, state and federal health and safety protocols and guidelines during the auction,” said Scottsdale Mayor Jim Lane. “They’ve demonstrated how an in-person event can be successfully managed. We appreciate their commitment to protecting the health of everyone who attended the event and look forward to working with them on their next Scottsdale auction.”

AAPEX 2021 Opens Registration
Connect with us