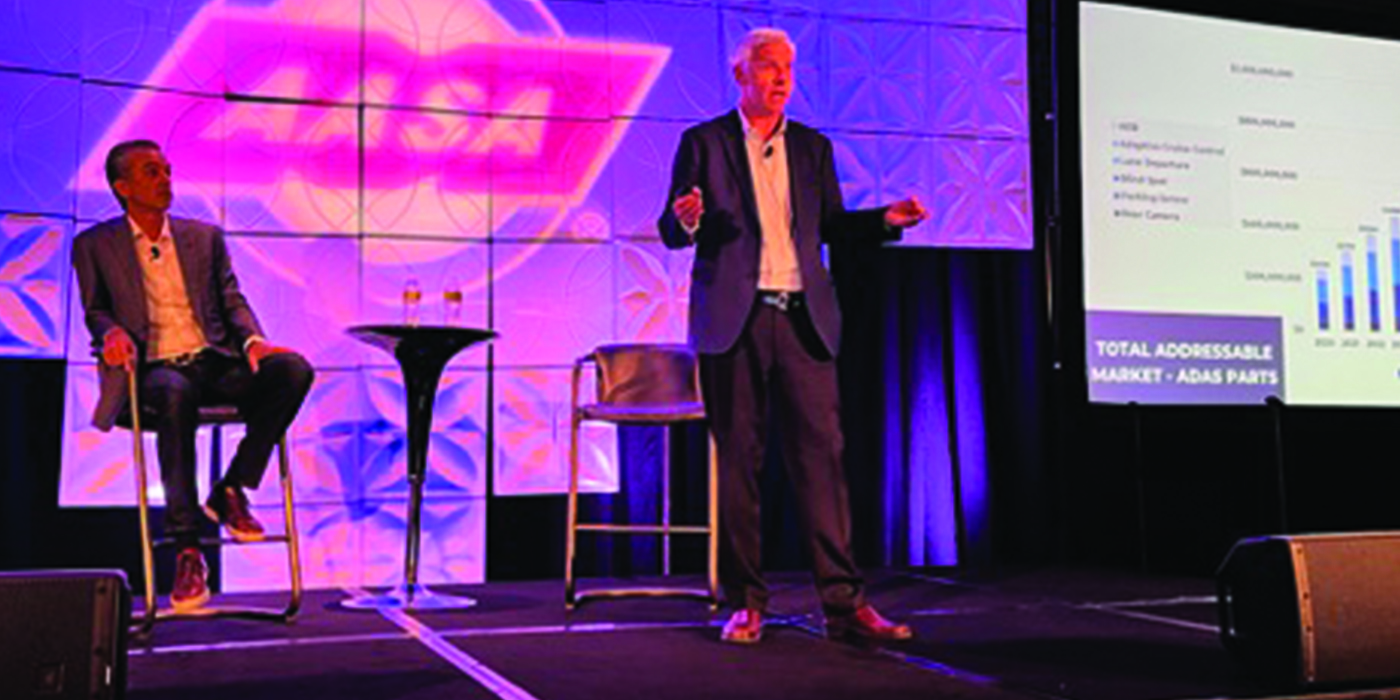 More than 90% of ADAS work that comes into mechanical shops is outsourced to a dealership.

When it comes to advanced driver-assistance systems (ADAS), there’s good news and bad news for the automotive aftermarket.

First, the good news. The total addressable market for ADAS replacement parts and service is projected to skyrocket from $317 million in 2021 to $1.1 billion in 2030 – expanding at nearly 17% compound annual growth rate.

Those projections come from Innovatrium, an Ann Arbor, Michigan-based consulting firm that conducted a study on ADAS opportunities in the aftermarket. The Automotive Aftermarket Suppliers Association (AASA) commissioned the study, which included interviews with 350 repair shops, an in-person focus group and a review of 91 journals, articles and academic papers on the subject.

Speaking at the AASA Vision Conference, Jim Fish, lead partner at Innovatrium, asserted that ADAS is “singularly the highest growth opportunity in the aftermarket.” In 2021, more than 1 million vehicles required ADAS service in an aftermarket shop, according to the Innovatrium study.

And now for the not-so-good news: More than 90% of ADAS work that comes into mechanical shops is outsourced to a dealership.

On the collision repair side, the researchers found that more than 75% of ADAS services coming into an auto body shop are performed elsewhere. In 2021 alone, auto body shops outsourced $177 million worth of ADAS calibration work. While mobile technicians might pick up some of that work, the majority likely goes back to a dealership.

The researchers concluded that ADAS features such as automated emergency braking, blind-spot detection, lane-departure warnings and rear cameras will lower crash rates by 20% in 2030. What’s noteworthy about that data point is that 45% of ADAS features are deactivated by the consumer.

Factoring in the independent aftermarket’s limited capabilities for ADAS service – and the likelihood that some consumers will forego ADAS repairs if their vehicles are drivable – the total “likely” ADAS opportunity for the aftermarket is $236 million by 2030.

“This is a radical reduction from the total available market to the total likely market,” said Matt Ballard, head of research at Innovatrium. “ … We’re starting off with this low capability in the aftermarket, and it’s growing slowly. And presently, there doesn’t appear to be anything that would change that.”

Still, the researchers concluded that ADAS is a problem worth solving. They identified three major problems that are inhibiting growth of ADAS business in the independent aftermarket.

The cost of ADAS replacement parts and equipment are out of reach for most shops, the study found. In many cases, only OEM parts are available, and the lack of standardized calibration processes add to the complexity of performing ADAS work.

“Our call to action is we need aftermarket alternatives,” Fish said. “We need parts that can do this. … And then standardized processes are going to increase aftermarket adoption.”

ADAS is a new and intimidating technology that requires a high-end diagnostic skillset to properly service it. Some shops say there isn’t enough volume of ADAS work to develop in-house capabilities.

The researchers asserted that more training for technicians is needed to bring shops’ ADAS competency up to speed.

More and more mass-production vehicles now come standard with potentially life-saving ADAS features. However, the real-world application of this technology is troubling, with 45% of ADAS features being deactivated for various reasons.

According to the study, 41% of consumers are shutting off ADAS features because they don’t believe they actually work, while another 41% find these features distracting and 30% believe they’re not needed.

The researchers recommend a combination of consumer education/information; regulations to ensure that ADAS features are being used as they were designed to be used; and verification.

Fish argued that ADAS is on a trajectory that’s similar to the aftermarket’s gradual adoption of the SAE J2534 standard for reprogramming vehicle ECUs. Fifteen years ago, most ECU reprogramming was being sent to a dealership. Today, 80% of mechanical shops with six or more bays are performing their own J2534 reprogramming.

“We have a long way to go, but we’re not going to get there unless we do something about it,” Fish said. “And no one company is going to solve this. It’s just not going to move the needle. We really need all of us together.”

Advertisement
In this article:AASA, AASA Vision Conference, adas
Print
Up Next: