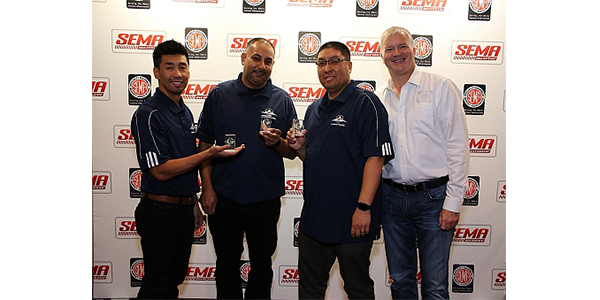 “Everyone at United Pacific Industries is proud of this global recognition for the products they worked very hard to bring to market,” said Jai Baek, marketing and creative director at United Pacific Industries. “Everything we do is aimed at creating usefulness and value for our customers, no matter where they live; and we are thrilled to be recognized for our new mirrors and taillights for vintage Chevy car builders.”

The SEMA Global Media Awards Program recognizes those companies that manufacture specialty equipment products and accessories that would have mass appeal to consumers in countries outside the United States. This year, more than two dozen judges from 15 countries participated. Each reviewed and evaluated nearly 3,000 new product entries at the SEMA Show, before selecting the products they believed offered the greatest interest for automotive enthusiasts in their home countries.

Again, United Pacific’s products resonated with auto journalists from around the globe:

Round Exterior Mirror with LED Turn Signal for 1966-72 Chevy Passenger Cars (part numbers 110825 and 110826): Looking just like the original chrome mirrors offered on 1966-72 Chevy cars, the officially licensed GM restoration replacements include a discreet LED turn signal indicator, just like the feature incorporated on many new vehicles today. High-quality diecast metal and chrome plated with Chevy bowtie logo. The easy 12-volt hookup for the indicator simply routes through the door jamb and connects to the front turn signal wiring under the dashboard. The left- and right-hand versions are sold separately, and the right-hand version has a convex mirror surface for a broader view.

Rectangular Exterior Mirror with LED Turn Signal for 1968-72 Chevy Passenger Cars (part numbers 110296 and 110297): Similar to the chrome mirrors described above, but offered in the rectangular shape that was included on some 1968-72 models. The left- and right-hand versions are sold separately, and the right-hand version has a convex mirror surface for a broader view. Both versions are included with the mounting pads.

LED Sequential Tail Lights for 1955 Chevy Cars (part number 110207): 48 super-bright SMD LEDs add can’t-miss-it illumination for the popular ’55 Chevy. They’re arranged behind high-quality, red polycarbonate lenses (without backup lights) housed in a “custom” one-piece, for a factory look. A sequential function for the turn signals is included and the customer can choose to use it or stay with the conventional signal operation, with a simple flick of a switch on the lighting element. Additionally, a brake “attention” feature is also available with a sequence-once function. Each taillight assembly (sold separately) offers plug-and-play operation with a 1157-type connector. United Pacific also recommends their license plate frame with an LED backup light (part number 50187).

“United Pacific is always working to develop new parts and products that help enthusiasts take their projects to the next level,” said Baek. “These new mirrors and taillights not only add modern technologies to classic cars, but they increase visibility for the driver and other motorists, which can enhance safety.”

Advertisement
In this article:United Pacific Industries
Print
Up Next:

Edelbrock Issues Clarification On Nitrous Oxide Line
Connect with us