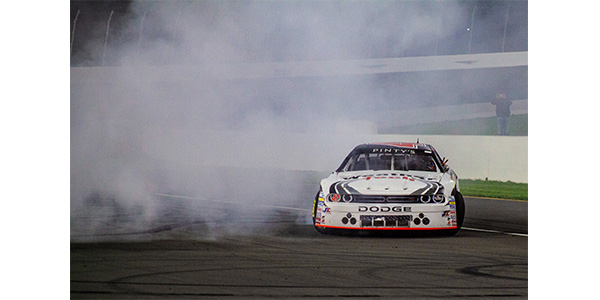 Spectra Premium has reported that five drivers have used the specially designed Spectra Premium high-performance radiator in the 2018 NASCAR Pinty’s Series, led by Louis-Philippe Dumoulin who won his second series championship last Saturday, Sept. 29, at Jukasa Motor Speedway. Alex Tagliani finished second in the championship after a season-long battle that included two victories for the Montreal driver, at the Grand Prix de Trois-Rivières (GP3R) and at the Canadian Tire Motorsport Park in late August.

The NASCAR Pinty’s Series is a national NASCAR racing series in Canada, that derives from the old CASCAR Super Series which was founded in 1981.

“For me, the Spectra Premium high-performance radiator is a very important component of the powertrain,” said Louis-Philippe Dumoulin. “It has provided us with effective and reliable engine cooling right from the start. We are very proud to have won the 2018 NASCAR Pinty’s championship with the Spectra Premium radiator, the first championship it won in this series, just as Dumoulin Competition earned its first championship since we started preparing our cars in our own Dumoulin Compétition shop.

“Our team members have cooperated with Spectra Premium engineers in the development of the radiator and have been using it for two years. We are never worried about engine temperature, especially when running in a tight pack even though the radiator gets warm air from the other cars around it rather than cooler airflow on a clear track. The radiator handles the extra cooling load efficiently, ensuring that the engine never overheats and leaving me to concentrate on driving flat-out,” Dumoulin said.

“The extra cooling capacity of the Spectra Premium radiator also lets the engine run at a lower, more efficient temperature,” he added. “This allows me to manage the radiator air intake area for optimal engine temperature and the lowest possible aerodynamic drag. For the crew, the radiator is easy to integrate into the front of the car (height, position and angle), and easy to install and remove as we develop all our engine and aerodynamic systems.”

The Spectra Premium high-performance radiator left its mark on the 2018 season, accumulating five wins, 16 podium, 18 top-five and 29 top-10 finishes in 13 races, thanks to brothers Louis-Philippe and Jean-François Dumoulin as well as drivers Alex Tagliani, Larry Jackson and Alex Labbé.

“I congratulate Louis-Philippe for his remarkable championship victory. From the very first race which he won and grabbed the initial lead in the championship, he showed us consistent excellence on the way to this well-deserved title. He also demonstrated all the progress the Dumoulin Competition racing team made through their hard work,” said Jason Best, senior vice president, aftermarket, Spectra Premium Industries. “I would like to compliment both drivers, Louis-Philippe and Alex, for having come so far this season and for providing fans with exciting race action right up to the last checkered flag. We at Spectra Premium are immensely proud that our Canadian-made, high-performance radiator has found its way to the top of the national stock-car series.”

Spectra Premium Brand Ambassador Dumoulin and fellow competitor Tagliani adopted the high-performance radiator in 2017. For his part, Dumoulin had a career-best finish in stock-car road races with a podium finish in Toronto and two fourth-place finishes, at the Grand Prix de Trois-Rivières (GP3R) and at the Canadian Tire Motorsport Park. He also will take part in the Spectra Premium Driver Exchange Program between NASCAR Canada and NASCAR Europe when he will drive a Europe-based No. 04 race car also equipped with a Spectra Premium high-performance radiator at the Zolder (Belgium) road-race course later this month.

Advertisement
In this article:Motorsports, Pinty's Series, Spectra Premium
Print
Up Next: