Schaeffler Confident of EU Merger Approval in 25 Days; Tire Unit Not Noted as Part of the Deal - aftermarketNews

Schaeffler Group has received the go-ahead from the EU Commission to formally file its Continental AG merger notification, but speculation remains that Conti’s new owners may sell some of their assets. 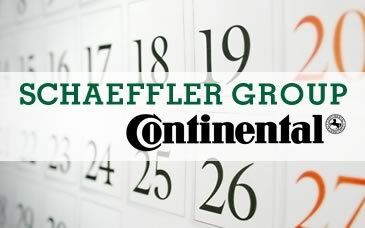 In an official statement, Schaeffler Group reported that it would submit the documents required for initiating a merger clearance examination last Friday. "We will implement our strategy according to plan and conclude the takeover after approval from the EU Commission,” said Jurgen Gelsinger, Schaeffler Group president and CEO.

However, while Schaeffler’s public comments are fine-tuned to communicate that the merger plans are on track, details of whether or not tires will figure in any possible future merged company are noticeable by their absence.

In the EU approval statement Gelsinger said Schaeffler would aim to combine the two companies strengths in “mechanical, mechatronic and precision components for engines, transmissions and chassis with Conti’s strengths in electronic, software and system solutions for engines, chassis and the passenger compartment,” so together Schaeffler and Continental can “develop systems for reduced fuel consumption such as hybrid and electrical drives.” Tires were not defined as one of Continental’s strengths.

Following notification, the EU Commission will decide within 25 working days (“Phase I”) whether the merger will be approved or if a detailed “Phase II” inspection procedure will be initiated. Schaeffler is confident that it will receive Phase I approval, and therefore will get the deal rubber stamped this year.

Bankers close to the acquisition’s financial arrangements told Euroweek that financing for the deal is effectively being held as a bridge until it can be restructured next year “after planned asset disposals.” On this subject the bankers expect Schaeffler to “soon finalize a plan.”

Following publication of Schaeffler’s statement on EU approval, Associated Press reported that tendered shares in Continental grew by as much as 50 percent before leveling off at around 36 percent up, in response. (Courtesy of Tire Review/Tyres & Accessories)