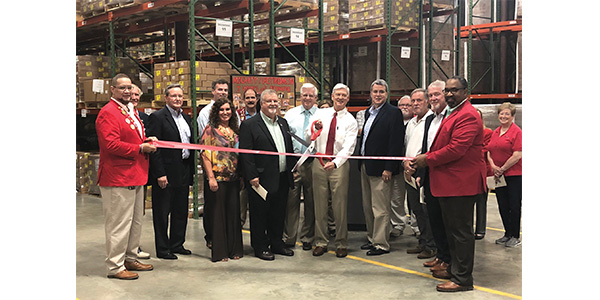 On Oct. 8th, the Mighty Product Center (MPC) in Jackson, Tennessee, celebrated a major corporate and municipal achievement with an additional 27,000-square-foot expansion.

Responsible for the engineering and construction project were Ken and Jeff Brasfield, principals of Brasfield Construction Inc. of Jackson. Mighty President and CEO, Ken Voelker, said in his welcome remarks, “This state-of-the-art distribution center represents a serious commitment to our local labor force and our many friends in Jackson, Tennessee.”

Mighty’s president described the function of the distribution center: “This facility is a critical element in the supply chain for the Mighty System. You may be asking, ‘What is the Mighty System?’ It is a network of over 100 domestic franchised distributors and six international partners who take Mighty’s private branded automotive maintenance products (filters, brake products, chemicals, lubricants) to the world marketplace.

“About a year and a half ago, we embarked on our second MPC expansion that we are proud to celebrate today. What was the thinking behind the project? Half of the space is to store today’s proliferation of lubricants in an ultra-safe area with fire-rated wallboard, special fire doors and a huge catch basin to capture any potential spills. The other half is for our vast international shipments with an expanded staging area for container loads of Mighty product,” Voelker added

“We are also celebrating our 55th year in business,” said Voelker. “Our home office is in Atlanta and we are just as proud to call Jackson, Tennessee, home of our national distribution center.”

Over the years, the MPC has been toured by several U.S. companies to study the operation. Warehouse Management magazine has extolled Mighty Product Center’s overall operation as a model of efficiency and working environment.

Advertisement
In this article:Expansion, Mighty Auto Parts
Print
Up Next:

EnerSys Named Approved Supplier Partner By APA
Connect with us