SOUTHFIELD, Mich. — Federal-Mogul has reported solid year-over-year results with third quarter sales of $1,692 million, gross margin of $279 million, pre-tax earnings of $22 million and net income of $4 million. Cash flow in the third quarter 2008 improved to $25 million versus a negative cash flow of $(114) million in the same period of 2007. 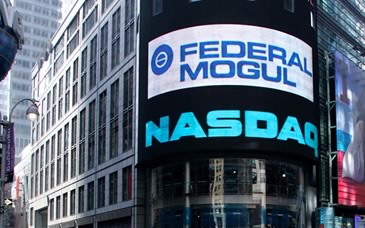 The company said these sales and operating results are comparable to year-ago levels, however third quarter 2008 performance was attained in a far more challenging market environment than in the third quarter of the prior year.

"The third quarter was increasingly difficult for the automotive industry,” said Jose Maria Alapont, Federal-Mogul president and CEO. “Our strong operating fundamentals served to limit the negative impact of the market downturn. As a result of our diversification, Federal-Mogul realized continued strong sales. The company’s decisive response to the declining global automotive market, including sharp cuts in discretionary spending, coupled with a global restructuring program designed to eliminate excess operating capacity, reduce requirements for operations support and streamline SG&A, enabled Federal-Mogul to realize another profitable quarter and positioned the company for this challenging market."

Federal-Mogul sales for the three-month period ending Sept. 30, increased $6 million to $1,692 million, compared to $1,686 million during the same period a year ago. Favorable foreign currency exchange lifted sales by $65 million in Europe and offset volume declines occurring largely in North America, while Asia-Pacific and other markets continued to perform.

Federal-Mogul announced, on September 17, 2008, a global restructuring plan designed to improve operating performance and respond to the challenging conditions in the global automotive industry. The plan, when combined with other workforce adjustments, is expected to reduce the company’s global workforce by approximately 4,000 positions or eight percent. The planned actions include several initiatives designed to streamline business processes, consolidate or close selected locations, and reduce general and administrative staffing.

The company, during Q3, recorded $11 million in restructuring expenses for workforce severance costs. Federal-Mogul continues to implement restructuring actions under the plan, and expects to finalize them and announce closure of a number of facilities during 2009.

"During these challenging times, consistent execution of the company’s proven strategy for sustainable global profitable growth helped to offset the market downturn and strengthen overall performance," explained Alapont. "Federal-Mogul has an established track record for restructuring to sustain operating performance and, furthermore, we possess a solid capital structure, considerable liquidity and a favorable bank financing package. This should enable us to retain our leading market position and prepare the company for future growth opportunities through organic growth or market consolidation," he added.

"We will continue to focus on our strong fundamentals, including world-class engineering and manufacturing with a cost-competitive global footprint; leading technology and innovation in vehicle and industrial products for fuel economy, alternative energies, emissions reduction and safety systems; with long-term customer relationships built on excellence in products and services, supply chain and operating performance," Alapont continued.

"Federal-Mogul remains a strong company with profitable financial performance, a solid balance sheet, considerable liquidity, favorable financing and a diverse portfolio of leading products and customers. Our sustainable global profitable growth strategy continues to guide the company as we prepare for challenging market conditions during the remainder of 2008 and in 2009," Alapont said.