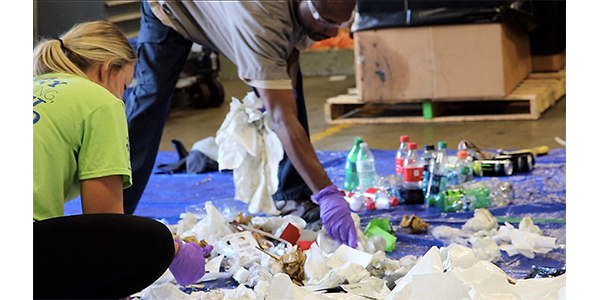 Over the past four years, the company has saved more than 9 million kilowatt hours – translating to a savings of more than $690,000 – through implementation of energy-efficiency projects.

In Bendix’s spent-material audits, a key component of the company’s zero-waste strategy, waste materials are sorted to learn what’s being thrown away and identify opportunities for landfill diversion.

Thanks to an effective combination of employee engagement and company-led sustainability initiatives, Bendix (Bendix Commercial Vehicle Systems LLC and Bendix Spicer Foundation Brake LLC) says it is one step closer to its sustainability and energy reduction goals. In 2018, Bendix moved closer to its goal of Zero Landfill by diverting 96 percent – more than 25.5 million pounds – of material waste from landfill disposal. In addition, over the past four years, the company has saved more than 9 million kilowatt hours – translating to a savings of more than $690,000 – through implementation of energy-efficiency projects.

The company aligned its efforts last year to fully support the United Nations’ (UN) ambitious Sustainable Development Goals (SDGs). The 17 SDGs were adopted by all UN member states in 2015 to promote prosperity while protecting the environment. As a global company and a part of the international community, Bendix said it aims to positively contribute to all the SDGs, with a focus on two in particular – SDG 12 (Responsible Consumption and Production) and SDG 13 (Climate Action) – through its long-standing corporate sustainability strategy.

Bendix has concentrated its sustainability efforts in reaching two key milestones: One, to become 100 percent landfill-free by 2020; and two, to achieve by 2019, an additional 10 percent reduction of its energy consumption and carbon dioxide (CO2) emissions from the 2014 baseline – by executing phase II of the energy-efficiency initiative ECCO2 (Efficient Cut of CO2).

“Bendix employees are personally committed to sustainability and support of the UN SDGs. These achievements reflect that dedication – which is matched at the corporate level, where taking responsibility for the world around us is a core value,” said Maria Gutierrez, director of corporate responsibility and sustainability. “We have locked arms in our quest to reduce the environmental impact of our company. Our efforts are vitally important to Bendix, ourselves and our families, and the planet.”

Bendix said it plans to impact SDG 12 (Responsible Consumption and Production) by employing a multiphase strategy to increase its waste diversion efforts.

This strategy integrates preventive measures in its production processes, such as avoiding waste creation, trialing new concepts for reuse and setting up closed loops, in addition to promoting awareness and engagement of all employees.

Initial steps in the strategy included the diversion of only industrial waste. Now, nine out of the 10 Bendix manufacturing facilities are industrial waste landfill-free. Reduction and diversion from landfill of all remaining waste streams, including general trash and cafeteria waste, is the focus of the efforts now. The company continues to drive initiatives that will allow Bendix to reach the overall goal to be landfill-free by 2020.

According to Gutierrez, a key component of the strategy is the spent-material audits, which identify remaining opportunities in the material that is still being sent to landfill and improvements in the existing recycling programs. In addition, the company says significant effort was spent in 2018 mitigating the impact of the Chinese waste import restrictions on the recycling industry in the United States – they had an impact on several Bendix locations and left them searching for alternate avenues to recycle their waste streams.

In 2019, the company plans to continue to focus on zero waste programs that eliminate the creation of waste and ingrain a product life cycle mentality. Initiatives include the elimination of Styrofoam used in company cafeterias and during employee events, establishing green procurement policies and finding innovative reuse solutions for hard-to-dispose wastes. The last strategy the company will pursue is the utilization of waste-to-energy facilities for disposal of the remaining wastes that cannot be sent for reuse or recycling.

Bendix’s Elyria, Ohio, headquarters is an example of the innovative solutions the company has implemented to advance its path to zero waste. A successful composting program that began in the site’s cafeteria in 2016 was expanded in 2018 to include the entire Elyria facility.

The Elyria Centralized Waste project, launched in June of 2018, set out to dramatically reduce waste sent to landfill by replacing desk-side trash/recycling pickup with the mindful disposition of waste by employees into new centralized collection stations. What began as more than 600 office collection points was simplified to 39 “centralized” locations, selected across the site to ensure there would always be a station conveniently located near all occupied areas.

“Audit results after project implementation indicated a 54 percent reduction in weekly waste sent to landfill – more than 11 tons annually,” Gutierrez said. “The elimination of desk-side bins forced employees to be actively engaged in the program and to make considered choices as to the amount of waste they generated and the ultimate fate it would have.”

Creating an environmentally conscious employee base helped progress the company culture in unexpected ways, she noted. For example, Bendix extended the green culture beyond their four walls by donating more than 300 recycling bins to local schools, helping them expand their landfill diversion efforts and promote recycling habits among the younger generation.

Because of his leadership in the deployment and success of the centralized waste program in Elyria, William Schubert – Bendix corporate manager, environmental and sustainability – was named one of the 42 inaugural Waste Fit Champions announced during Sustainable Brands’ New Metrics ’18 conference in Philadelphia. The program recognizes sustainability leaders for reducing waste, improving recycling and delivering on sustainability in their organizations.

Bendix plans to advance SDG 13 (Climate Action) by committing to international targets on climate protection and investing in improving the energy efficiency of processes and facilities. These actions include energy audits to identify energy conservation projects, use of renewable energy sources, logistics optimization and programs for reducing the carbon footprint of products.

The company’s energy savings over the past four years – more than 9 million kilowatt hours and $690,000 – are due in large part to Bendix’s continued improvement of lighting efficiency, and a focus on the primary energy consumers, HVAC and compressed air. Bendix raised the percentage of efficient lighting at its locations from 58 percent in 2016 to 99 percent in 2018.

Bendix also is standardizing its energy submetering system and reporting. Submetering is the installation of metering devices with the ability to measure and identify the energy usage of the major energy consumers within each facility. The company’s real-time data collection drives efficient management of energy demands, as well as peak and down times. Bendix has energy submetering at its Elyria headquarters, as well as its Acuña, Mexico, and Huntington, Indiana, campuses. It plans to have implemented submetering at all major manufacturing locations by the end of 2019.

Employee awareness and participation are key requirements of the company’s sustainability programs. Across several Bendix locations, a group of employee-driven organizing teams – known as the Green Teams – focus on identifying energy-saving projects or coordinating activities that instill a zero-waste mentality, then offering opportunities for employees to take part. These activities are known as “Zero Waste Events.”

“Planning ahead of time to reduce, reuse and recycle as much of an event’s waste as possible – to minimize the amount of material ending up at a landfill – is at the heart of a Zero Waste Event,” Schubert said. “By coordinating these efforts with on-site events like our annual Corporate Values Day, recurring leadership meetings and other employee or volunteering events, the teams are able to further raise awareness of site segregation efforts and prevent even more waste material from being generated or winding up in a landfill.”

Bendix, together with its employees, aims to fully support the UN Sustainable Development Goals.

“All employees who consider the environment in their day-to-day work help to implement the company targets and the Sustainable Development Goals – whether by saving electricity or separating waste,” Gutierrez said. “And for Bendix, the company hopes that by transparently reporting on all of our sustainability activities, we can encourage other businesses to unite in the journey to achieve these ambitious goals.”

Advertisement
In this article:Bendix, Zero Waste
Print
Up Next:

BorgWarner Announces Three Year Net New Business Backlog of $2B To $2.4B