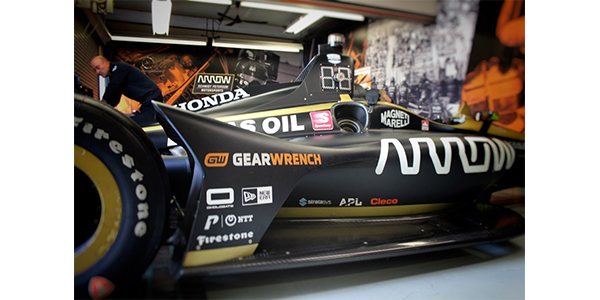 Apex brands, including GEARWRENCH (hand tools and storage), Cleco (power tools) and Weller (soldering equipment), make up the bulk of the sponsorship, filling out the Indianapolis-based NTT IndyCar Series team’s garages with tools and tool storage options that far exceed the initial investment just a year ago. Product development and content creation are two other areas that will see dramatic growth from the previous season.

“We couldn’t have picked a finer partner,” said Jim Roberts, CEO of Apex Tool Group. “We realized quickly that our two organizations share a set of values that center around celebrating the whole team. It’s as much about the guys turning the wrench as it is about the guys turning the wheel, and we’re proud to help shine the spotlight on them through this partnership. It’s about putting the best tools in the hands of the best mechanics the racing industry has to offer.”

The partnership includes two of the four IndyCar drivers on the Arrow Schmidt Peterson Motorsports team — James Hinchcliffe and Marcus Ericsson — along with their more than 50 crew members. That team of skilled mechanics and engineers will use Apex-supplied tools every day.

GEARWRENCH branding will be taking over the space in the team’s garage in Gasoline Alley at Indianapolis Motor Speedway leading up to the 103rd Running of the Indianapolis 500.

The collaboration also creates a testing ground for advanced tool development. Arrow SPM mechanics and engineers will get to test-drive new concepts and tool prototypes from ATG designers, provide real-time feedback and impact future products. The result is better tools for better performance.

“We’re always pushing for that little bit of extra edge,” said Jon Flack, president of Arrow Schmidt Peterson Motorsports. “Apex puts bright people in our business, and we innovate together, we collaborate together and we’re finding advantages at every turn. It’s not a sponsorship, it’s a partnership.”

From a content standpoint, the ATG and Arrow SPM teams are finding new ways to showcase the highly skilled work being done in the garage and the top-of-the-line tools that are used to do it. To get a view behind the scenes, fans can follow GEARWRENCH on Facebook, Instagram, YouTube and Twitter.