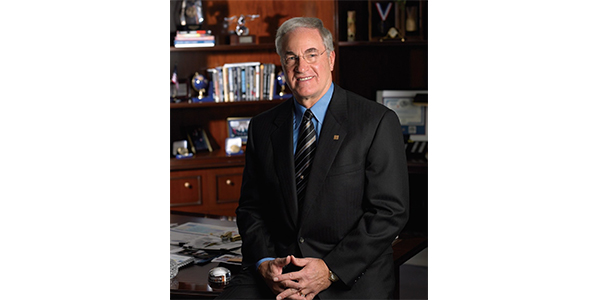 Described as an innovative manufacturing strategist, Dauch was honored for his expansive career, which included leadership positions at both the automotive OEM and supplier levels.

Described as an innovative manufacturing strategist, Dauch was honored for his expansive career, which included leadership positions at both the automotive OEM and supplier levels.

“Dick Dauch was known for many things – an icon in the industry, a pillar in the community and a leader amongst leaders, but most importantly it was his passion for manufacturing, commitment to customers and his dedication to mentoring and developing his team that made him a legend in Detroit and around the world,” said David Dauch, AAM chairman and chief executive officer. “We thank the Automotive Hall of Fame and are honored that he joins their prestigious ranks. While we wish he were here to celebrate, I know that he would have been both humbled and grateful for this recognition.”

After graduating from Purdue University in 1964 with a Bachelor of Science in Industrial Management, Dick Dauch began his career at General Motors’ Chevrolet Flint Assembly plant. He was later promoted to plant manager of Chevrolet Livonia Spring & Bumper in 1973, making him one of the youngest plant managers in GM’s history at the time.

After ascending through various leadership roles within GM, Dauch joined Volkswagen in 1976. Dauch was part of the Volkswagen of America team that at the time established the first successful transplant assembly facility in the United States. Dauch led all manufacturing efforts for Volkswagen of America, including the launch of the highly successful VW Rabbit.

In 1980, Lee Iacocca recruited Dauch to join Chrysler to resurrect the company’s ailing manufacturing operations. With his visionary, people-oriented, no-nonsense leadership approach, he planned and directed the implementation of Chrysler’s world-recognized, just-in-time materials-management system, in-line sequencing and three-shift assembly-pattern capability. He also directed the construction of the Chrysler Technical Center, three new assembly plants and all production and launch activity, including the Chrysler minivan.

In 1992, GM announced that 18 of its manufacturing plants were for sale, including five that encompassed the Final Drive and Forge business unit of the company. In response to the announcement, Dauch, who had recently retired from the Chrysler as executive vice president worldwide manufacturing, formed a small investment team to purchase the five driveline and forging assets that GM had up for sale. On March 1, 1994, AAM became a standalone, independent company.

Headquartered in Detroit, AAM has more than 25,000 associates operating at nearly 90 facilities in 17 countries, with sales in excess of $7 billion.

“Twenty-five years ago, the idea for a global, Tier 1 automotive supplier was born at our family’s kitchen table,” said David Dauch. “Over the years, we’ve grown into a global company focused on exceeding our customers’ expectations and developing the industry’s best driveline, metal forming and casting technology. As we celebrate our silver anniversary this year, we remain focused on delivering power through our innovative products, industry-leading quality, process-driven operational excellence and technology leadership. But we also remember that relationships are vital, and we continue to strengthen both our connection to our customers and the community as well as other key stakeholders. We are honored to carry on my father’s legacy and continue to represent the standards, values, principles and beliefs by which he led his life.”

Dick Dauch’s reputation as a manufacturing expert and entrepreneur is widely recognized in North America and around the world. He lectured extensively on the subject of world-class manufacturing and authored two books, “Passion for Manufacturing” and “American Drive.”

In addition to his indelible influence on the global automotive manufacturing industry, Dauch also was an active and respected philanthropist and community leader. He held various board leadership positions with organizations such as the National Association of Manufacturers, the Detroit Economic Club, the Detroit Renaissance and the Detroit Regional Chamber, Focus Hope and the United Way for Southeastern Michigan.

Donations from the Dauch family also helped create the Dauch Center for Management of Manufacturing Enterprises and the Dick and Sandy Dauch Alumni Center at Purdue University, as well as the Richard E. and Sandra J. Dauch College of Business and Economics at Ashland University. Additionally, the Dauch family partnered with the National Football League to establish the NFL/YET Boys & Girls Club at the Dick & Sandy Dauch Campus in Detroit and collaborated with the Boy Scouts of America to establish the Dauch Scout Center in Detroit.

Advertisement
In this article:Chrysler, General Motors
Print
Up Next: