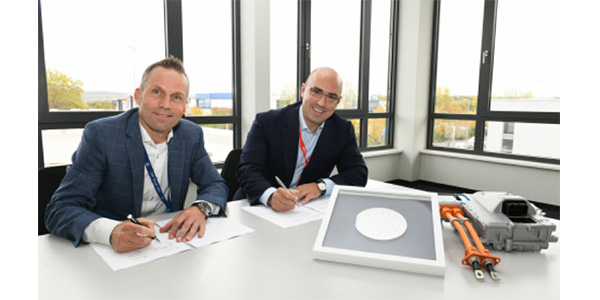 A strategic partnership has been created to advance the Electric Powertrain with Silicon Carbide-Based Inverter.

With this strategic partnership, ZF and Cree say they are intensifying their existing cooperation. “We’re delighted that we’re building on our cooperation with Cree using their Wolfspeed silicon carbide technology and are absolutely convinced that combining our strengths will further improve efficiency and competitive edge for our components and systems,” said Jörg Grotendorst, head of the ZF E-Mobility Division.

The future use of silicon carbide-based power semiconductors will increase the range for electric vehicles in contrast to today’s standard silicon technology, according to the two companies. Due to high battery costs, the efficient electric drive represents an enormous growth potential for the foreseeable future. In particular, silicon carbide technology in conjunction with the 800-volt vehicle electrical system voltage makes a significant contribution to further increasing efficiency.

“Partnering with a tier-one leading global automotive supplier like ZF for the use of silicon carbide-based power inverters in next generation electric vehicles is indicative of the integral role silicon carbide plays in extending the capabilities of EVs everywhere,” said Gregg Lowe, CEO of Cree.

Since January 2016, ZF has bundled its electromobility activities in the E-Mobility Division headquartered in Schweinfurt, Germany. More than 9,000 employees work in this division, spread across various locations around the world.

Advertisement
In this article:Cree, ZF
Print
Up Next: