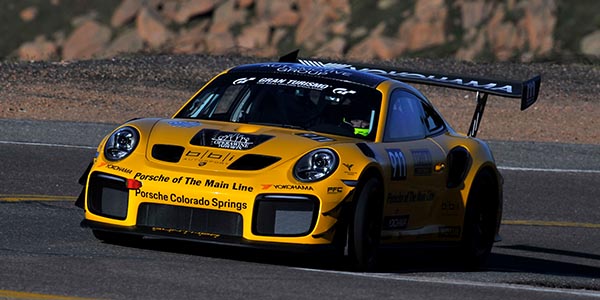 Yokohama Tire-sponsored Blake “Bilko” Williams and David Donohue are taking on the mountain again. Both drivers will be competing in the 98th running of the Pikes Peak International Hill Climb, Aug. 30, in Colorado Springs, Colorado.

It will be redemption time for Williams, who finished fifth last year as he missed his shot in qualifying, cutting his run up the hill short because of weather – despite being one of the quickest in practice. All drivers in the division will compete on Yokohama’s ADVAN A052 tires, which are ideal in both wet and dry conditions.

Donohue is also back in the “Race to the Clouds” in the number 911 Porsche GT2 RS Clubsport. The 700-horsepower car, fitted with ADVAN A005 slicks, is slated to run in the Time Attack 1 class. This will be Donohue’s 4th time competing at Pikes Peak. He won the class in 2018 and finished second last year.

“It will be great to see Bilko again, this year representing Yokohama in the iconic ADVAN livery GT4,” said Drew Dayton, Yokohama’s motorsports manager. “He’s eager to atone for last year, and David just keeps on pushing, looking to regain his title on ADVAN A005s.”

Advertisement
In this article:Yokohama Tire
Print
Up Next:

Speakers List Announced For YANG's Virtual Experience
Connect with us