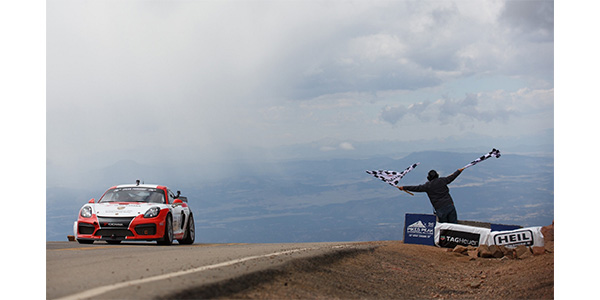 The tiremaker has 15 drivers competing in four classes – including returning champions David Donohue and Travis Pastrana.

For the second consecutive year, Yokohama Tire and Porsche Motorsport North America are teaming up for another run in the “Race to the Clouds.” Yokohama is the sponsor and exclusive tire supplier for the Porsche Pikes Peak Trophy by Yokohama at the famous Broadmoor Pikes Peak International Hill Climb Organization, on June 30 in Colorado Springs, Colorado.

The tiremaker has 15 drivers competing in four classes – including returning champions David Donohue and Travis Pastrana. Donohue, who captured the win in the Time Attack 1 class last year on ADVAN A005 racing slicks, will compete this time in the Pikes Peak Open division. Donohue will be in a Porsche GT3 R TT on A005s.

In the super-competitive Time Attack 1 class this time, Yokohama will feature four drivers, including Don “Fastest Pastor” Wickstrum, who will be on ADVAN A005s.

Six entries will be competing in the Porsche Pikes Peak Trophy by Yokohama class, including action sports star and Nitro Circus founder Pastrana, who won the inaugural class race last year. Pastrana will race against five others, including fellow Team Yokohama member and Nitro Circus performer Blake “Bilko” Williams. All will compete on Yokohama’s ADVAN A052 tires.

Four drivers also will compete under the Yokohama banner in the Open Wheel division in Sierra Alpha cars. All will be on ADVAN A005 rubber.

“With David taking on a higher class, Travis going for a back-to-back title, the Time Attack 1 upping the competition and all the other top racers we have competing at Pikes Peak, it’s going to be a fantastic event,” said Fardad Niknam, Yokohama’s senior director of consumer product planning and product marketing. “Travis going against Bilko will also be great fun. We can’t wait to see how the race plays out.”

Advertisement
In this article:hill climbs, Yokohama Tire
Print
Up Next: