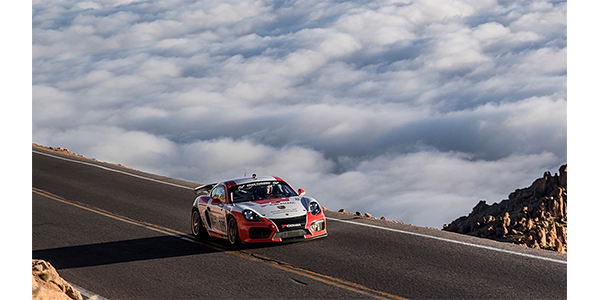 Travis Pastrana also is back to defend his title in the Porsche Pikes Peak Trophy by Yokohama. The ADVAN A052 is once again the spec tire.

For the second straight year, Yokohama is partnering with Porsche Motorsport North America and the Pikes Peak International Hill Climb Organization as the sponsor and exclusive tire supplier for The Porsche Pikes Peak Trophy by Yokohama.

Action sports star and Nitro Circus founder Pastrana won the inaugural class last year and is set to defend his title in the “Race to the Clouds,” June 30 in Colorado Springs, Colorado. Pastrana will race against five others in the Porsche Pikes Peak Trophy division, including fellow Team Yokohama member and Nitro Circus performer Blake “Bilko” Williams. All will compete on Yokohama’s ADVAN A052 tires.

“We’re honored to support Porsche again in this exciting division at Pikes Peak,” said Fardad Niknam, Yokohama’s senior director of consumer product planning and product marketing. “Yokohama’s return last year to the mountain was a resounding success punctuated by Travis’ incredible victory. We can’t wait to see what he and the other competitors can do again driving the Cayman GT4 Clubsport machines on ADVAN A052 street tires.”

Added Pastrana, “I had more fun at last year’s Pikes Peak Hill Climb than I have had at any event in a very long time. It’s a week of driving an historic and epic road in a fun class with some amazing drivers. This year is going to be even more fun because my friend and competitor Bilko Williams will be racing against me in the same division. This year is going to be one hell of a close race and I can’t wait!”

“We are very pleased to announce the continuation of the Porsche Pikes Peak Trophy by Yokohama,” said Dr. Daniel Armbruster, president and CEO, Porsche Motorsport North America. “The partnership with the Pikes Peak International Hill Climb Organization and Yokohama exceeded every expectation in 2018. It is only natural that all three partners are excited about this division returning in 2019 and, I hope, for years to come. This fits perfectly within the objectives of Porsche Motorsport North America in providing our customers an excellent platform with the Cayman GT4 Clubsport, one which can participate in one of the world’s premier motorsport events.”

Running in the Porsche Pikes Peak Trophy division, the recently debuted 718 Cayman GT4 Clubsport and the previous generation Cayman GT4 race car are both eligible to compete in the division. Appropriate performance balancing will assure an equal field, according to event organizers. Yokohama will provide tire technical support throughout the week.

Advertisement
In this article:Motorsports, Yokohama Tire
Print
Up Next: