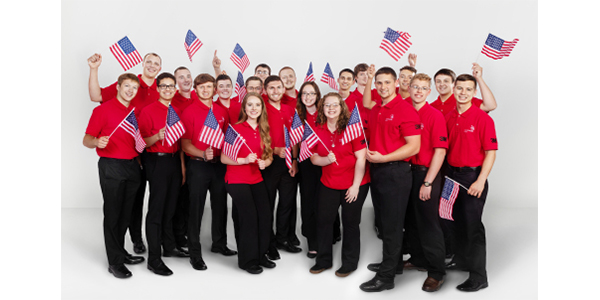 SkillsUSA this week revealed 20 young competitors who will represent the United States at the WorldSkills competition, the largest international showcase of the skilled trades, which will take place in Kazan, Russia.

SkillsUSA is a partnership of students, teachers and industry working together to ensure America has a skilled workforce. Its selected team members, with an average age of 19, are masters in their craft. Their dedication to training and perfecting their skills will be on display as they compete against peers from across the globe in a variety of intense skills challenges.

“They come from all corners of the country, they compete for different reasons, but they are all focused on one goal: standing atop the WorldSkills podium, a gold medal hanging around their neck and honoring the American flag as ‘The Star-Spangled Banner’ fills the conference center loudspeakers,” said SkillsUSA’s executive director, Tim Lawrence. “From mechanical engineering to hairdressing to aircraft maintenance, we’ve watched these competitors gain expertise and create purpose behind their passions. We’re thrilled the WorldSkills USA team will get the chance to represent their country while excelling at a skill they love.”

Every two years, competitors from 76 countries and regions around the world compete in more than 50 different trade skills at WorldSkills. The next competition will take place Aug. 22-27, 2019, in Kazan, Russia, and will showcase trade skills from construction and building technology, creative arts and fashion, information and communication technology, manufacturing and engineering, social and personal services, and transportation and logistics.

3M will serve as the lead sponsor of the 2019 WorldSkills USA team. “3M and WorldSkills USA share a commitment to addressing the shortage of qualified skilled workers across many industries,” said Mojdeh Poul, executive vice president, 3M Safety and Graphics Business Group. “As a global science-based company, we recognize that science, technology, engineering and math (STEM) skills are the foundation for many trades. This sponsorship is about inspiring the next generation of skilled workers and supporting their efforts in Kazan.”

Other team sponsors include Ferguson and Lowe’s.

Representing the United States at the WorldSkills competition in Kazan are:

“This WorldSkills USA team is the largest we have ever fielded, and I have extreme confidence that their experience, training and dedication will result in them bringing home multiple medals on behalf of the United States,” Lawrence said. “We also encourage everyone to follow this amazing team on their road to Kazan @WorldSkillsUSA on Facebook, Twitter and Instagram, and interact with them using the hashtags #WorldSkillsUSA and #RoadtoKazan.”

SkillsUSA works year-round to instill positive attitudes, build self-esteem and empower over 340,000 students nationwide to excel in the career path of their choice. The organization has 600-plus national partners and is integral to the training in more than 18,000 classrooms. SkillsUSA inspires students to follow their passion in skills that are valuable to them and our country. Years of hard work supported by SkillsUSA has led these 20 competitors to the experience of a lifetime: the WorldSkills 2019 competition.

The first WorldSkills competition was held in 1950 in Madrid, Spain. In 1973, President Richard Nixon recognized SkillsUSA (then known as VICA) as the official U.S. representative to WorldSkills. The United States and SkillsUSA have come a long way since first entering the competition in 1975. Hundreds of thousands of spectators, public policymakers, employers, teachers, trainers, technical experts and government officials from around the world will attend this biennial competition.

Advertisement
In this article:SkillsUSA, tech training
Print
Up Next:

AkzoNobel Delivers On Commitment By Returning An Additional $6.3B (US) To Shareholders Following Specialty Chemicals Sale