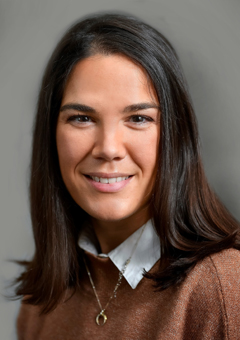 Valentina Baio said she was really “honored and surprised” to find out she was nominated to the 2021 class of AMN Women at the Wheel. However, when you hear her talk about her career accomplishments, it likely wouldn’t surprise anyone else. At the time of her nomination, Baio was serving as director of New Product Engineering at Dorman, where she’s worked for the past decade. She is now transitioning into a quality role, where she will be responsible for all of the engineering and quality systems, process and data at the company.

While pursuing an undergraduate degree in mechanical engineering at Lehigh University, Baio participated in the Formula SAE team, and that’s actually how Dorman found her. Six months after finishing her master’s, she accepted a position at the company. Getting promoted to a director position four years ago was a proud career moment for Baio. When her own boss – who was the director at the time – was promoted to a VP role, he suggested she consider applying. “I thought it was a complete longshot, and when I was told I had the position, it was surreal. I never thought it was going to happen, especially so early in my career.”

Now, Baio says the most gratifying part of her work is impacting the lives of her team. “I felt like I finally had an opportunity to really touch the lives of all the engineers here and really try to implement a lot of the improvements that as an engineer and then as a manager I felt were needed in the department.” This past year, Baio also was involved in helping to establish an Employee Resource Group for women working at Dorman. Her best advice to anyone looking for a similar career trajectory? “Just trust yourself and trust your instincts, and believe you capable,” Baio says.