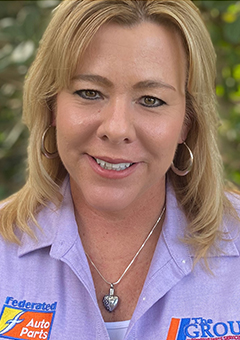 Director of Sales and Marketing

Traci Taylor is a people person, which makes her a natural fit for the automotive aftermarket. But being a woman in a male-dominated industry, it took some time to win over her customers.

Looking back on her 25-year career in the aftermarket – all of it at Vaca Valley Auto Parts – Taylor says her biggest accomplishment is “just sticking with it through the years.” Whenever a customer doubted Taylor’s knowledge or capabilities, it fueled her “to work that much harder and prove them wrong.”

She says she couldn’t have done it without the support of the Martin family. Jack and Evelyn Martin have owned Vaca Valley since 1974, and their son, Trevor, is the president. Taylor is especially grateful to Evelyn Martin, who passed away on March 1.

When Taylor made the leap from the counter to outside sales, her new job responsibilities included organizing training classes for Vaca Valley’s DIFM customers. At the time, Evelyn promised Taylor that she would attend every class with her, so Taylor wouldn’t be the only female in the room.

Several years before she passed away, Evelyn was diagnosed with Alzheimer’s disease and had to retire. But she attended those classes with Taylor “as long as she could.”

“She truly was the backbone of this company,” Taylor says. “She wasn’t like my second mother – she was my second mother. She taught me how to be tough in what used to be predominantly a man’s world.”